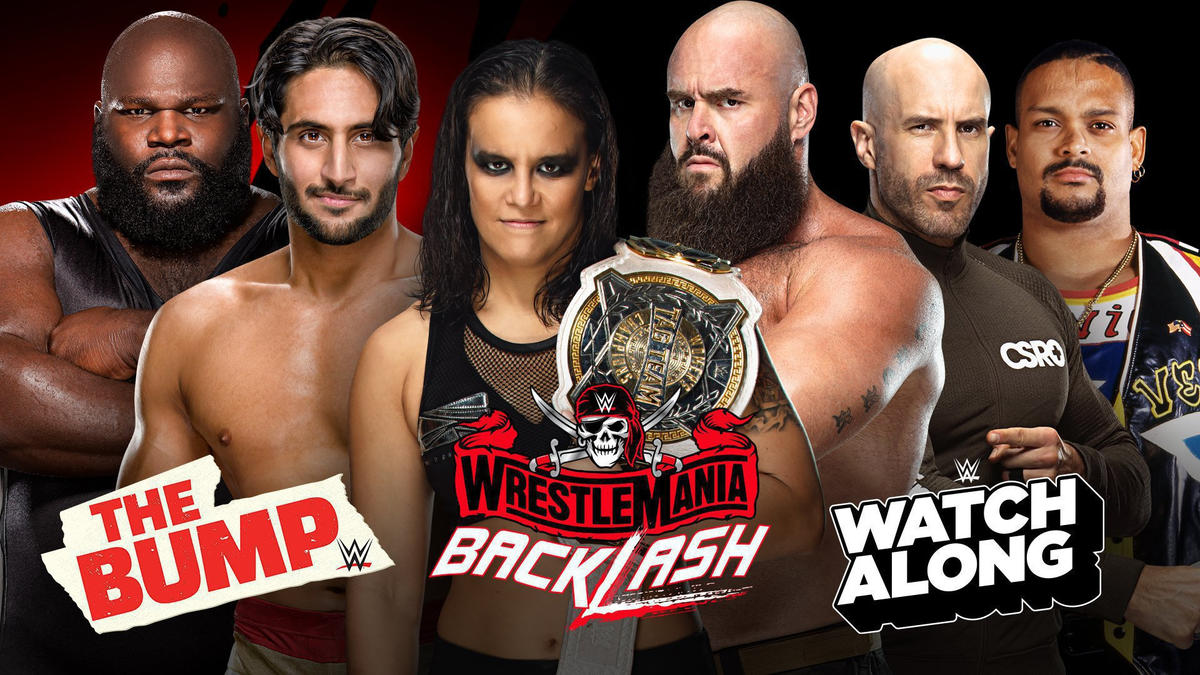 Get set for WrestleMania Backlash with a loaded Sunday slate of WWE programming.

A special WrestleMania Backlash edition of WWE’s The Bump
The crew of WWE’s The Bump takes over at 1 p.m. ET/10 a.m. PT on Peacock, Facebook, Twitter, YouTube, Instagram Live and Twitch as Braun Strowman and Cesaro lend their voices to help preview all the night’s action coming to the WWE ThunderDome.

WWE Watch Along
The best second-screen experience in sports-entertainment returns, as WWE Watch Along features a star-studded cast of Superstars alongside the pay-per-view event. One half of the WWE Women’s Tag Team Champions Shayna Baszler, Mark Henry, Savio Vega, Mansoor, Kayla Braxton and the cast of WWE’s The Bump and more will help break down the play-by-play from WrestleMania Backlash. Join the world’s best viewing party across WWE social platforms beginning at 7 p.m. ET/ 4 p.m. PT on YouTube, Facebook and Twitter. The stream will continue after the pay-per-view for post-show.

Catch it all and don’t miss WrestleMania Backlash, streaming live Sunday, May 16, beginning at 7 ET/4 PT, exclusively on Peacock in the United States and WWE Network everywhere else.

Previous post That Time I Accidentally Started A Pandemic In Cities: Skylines

Drew McIntyre might just have a path to the WWE Championship after all. After falling short inside Hell in a...

IMG Credit: WWEThe field is filling up. We are less than a month away from WWE’s annual Money in the...

In their first-ever singles matchup, Randy Orton and John Morrison will battle it out with the stakes high. A spot...

IMG Credit: WWEIt has been awhile. There are certain gimmick matches that become signatures in wrestling companies and that can...

We can now call the critically acclaimed (everywhere but here) Roman Reigns “Head of the Table” saga an objectively bad...

Ricochet vs. AJ Styles with a spot in the Money in the Bank Ladder Match at stake? Let’s do it....