Fernando Alonso, Sebastian Vettel, Carlos Sainz, Sergio Perez and Daniel Ricciardo have all been working their way through the process of adapting, and all have had hurdles to overcome.

In the case of Ricciardo, getting on top of corner entry and braking has been one of the main issues he’s faced as he’s tried to match the superb form of teammate Lando Norris.

Braking has traditionally been one of the Australian driver’s strengths, and over the years he’s been noted for his bold passing moves.

However, on his transition from Renault to McLaren this year he’s found it hard to become fully confident when exploring the limits.

He’s likened the process of adapting his driving to being “back at school,” such is the level of thought required.

“It’s like being a beginner all over again, like tutor yourself through every corner,” he said after qualifying in Barcelona.

“Good job, do that better, okay, improve a bit more here. Obviously the feedback I’m getting from the team is good, and they’re obviously trying to get me into some good habits with this car and the kind of characteristics.

“So it’s things like that, whether it’s braking or the way you get on throttle. Some are unique, and I guess I’m still having to be a little bit conscious about that, and teach myself enough that it does become natural.

“So it still does require a bit of thought. I think the quicker corners are a bit easier, you kind of just chuck it hold on. But the longer corners, you’re kind of in the corner for a long time, and having to be quite delicate and precise.

“The car is sensitive, and it’s working well in some ways but not well the others, and I think I’m trying to certainly programme myself to basically learn how to drive it faster. So I’m back at school.” 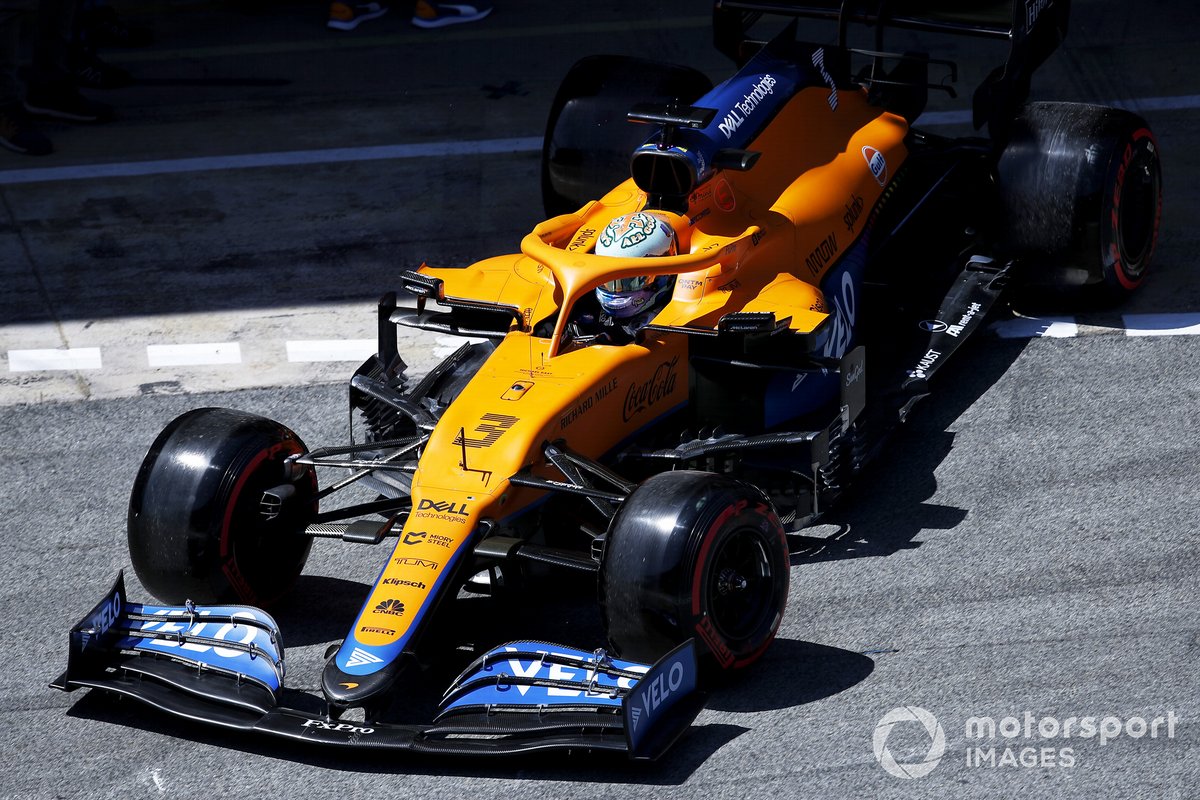 It might seem strange that an experienced multiple race winner like Ricciardo, who has switched teams more than once, should find himself in such a situation with something as fundamental to his craft as braking.

However, it’s a much more complicated and involved process than just standing on the pedal.

“Braking is quite a big hitter in laptime, and Dan’s always been a very, very strong braker,” McLaren technical director James Key explains. “We’ve seen some of his overtakes in the past, and he’s done it being very late on the anchors, and getting the pass.

“So it’s definitely a strength of his. I think changing to a different car, you’ve always got to adapt a bit to the way that car feels under braking.

So I think there’s lots of different aspects. The braking system itself often isn’t the major factor here. We all use very similar material, very similar systems, and so on.

“So in terms of the pedal feel, to a certain extent, there’s a bit of variability there. But certainly the bite and the braking performance itself is often very similar.

“I think where differences come in are things like engine braking, and how that works, and how to tune it accordingly.

“How the chassis works, how the aerodynamics work and support the car in certain conditions, is it strong in a straight line, which is what we’ve always been, or a little bit weaker if you’re trying to carry the brakes into a corner, or certain types of corner where you have different kind of braking conditions. That’s where you really get the differences creeping up.”

“I think what’s exacerbated that this year is the new tyres we have are slightly weaker in certain conditions compared to before as well,” says Key.

“So if you took the tyres from last year, they behave in a certain way, and probably to be honest, feel a bit more familiar to Daniel for that matter, and Lando and everyone else. But this year these tyres are slightly weaker in certain areas, and slightly stronger in others.

“One of the changes that we’ve noticed is braking. So it is just a process of adapting your feeling and what you want to do to what the car is actually doing. And of course from our side trying to adapt the car and facilitate what Daniel is trying to do. And we’re getting there, slowly.”

Ricciardo’s engineering team have various tools to play with as they try to make him more at one with the car.

“There’s certain things we can’t change,” says Key. “Tyres and other things will be the same, but in terms of the way the car behaves, the mapping of the engine, the feeling of the pedal are all things that are under our control, and we are chipping away at all those things to try to find a solution which works.”

Ricciardo is certainly making steps with the McLaren, and seventh on the Barcelona grid – a little over a tenth off fourth place and having lost his final Q3 lap due to hitting the chequered flag – still represented a decent effort.

“Today we hit the ground running,” he said. “FP3 was much better and qualy was just like steady progress, going a bit quicker each run. So I was certainly feeling comfortable. There’s say 15 corners on this track.

“I’m not saying I could have done that better today, but I know over time, I’ll start to just find those extra little half-tenths here and there to get a bit more out of the car.”