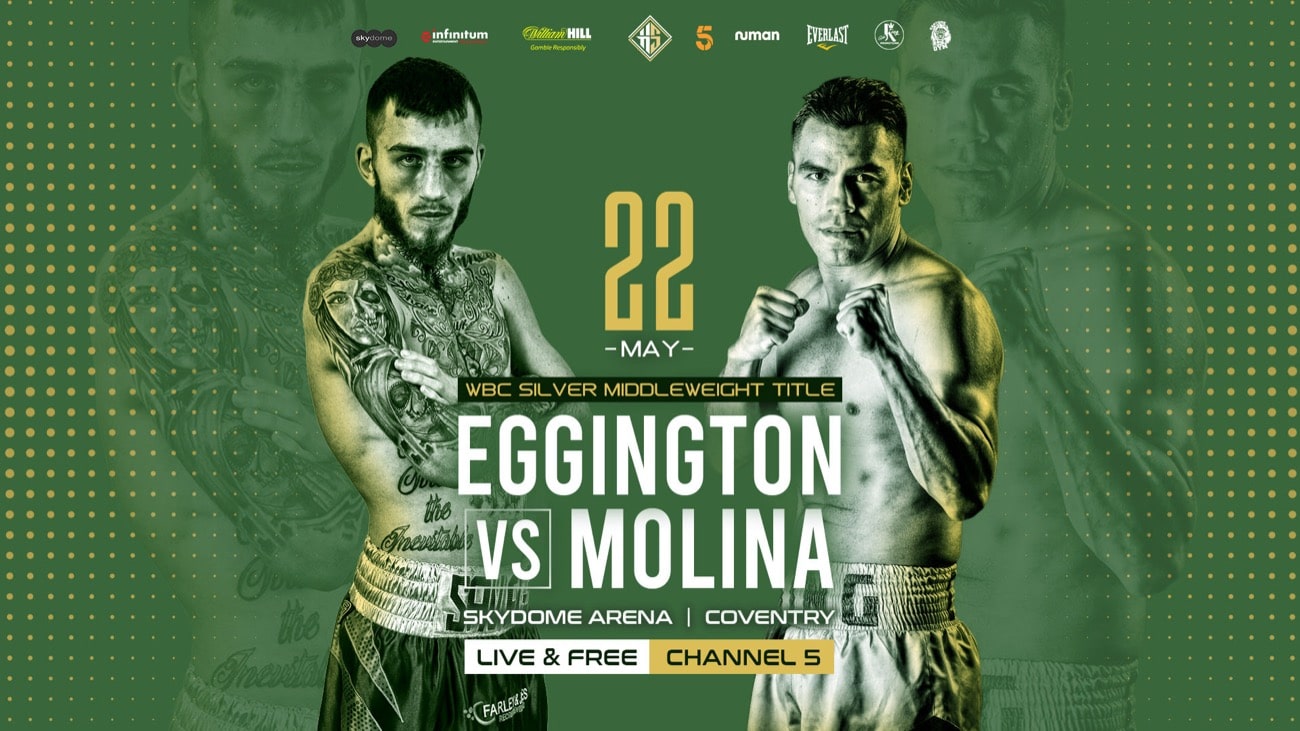 Sam Eggington believes a knockout or stoppage of former World Champion ‘King’ Carlos Molina will send a big statement to the middleweight division that he is ready to challenge for a World title next.

The Birmingham puncher is fired up like never before as he heads into battle with the Mexican hardman, who has never been stopped in 50 fights, on Saturday 22nd May at the Coventry Skydome Arena, exclusively live and free on Channel 5.

With the Vacant WBC Silver Middleweight Championship on the line, Eggington aims to grab the title with both hands to ensure a high ranking in the WBC that will place him in prime position to challenge for a World title.

Iron-fisted Eggington knows that a devastating performance – similar to his six round brutal destruction of Ashley Theophane last December – will send a red warning to the elite 160 pound operators that he is hammering on the door.

It’s been a long-time coming for the British, Commonwealth, European and International Champion in his near decade in the sport, but Eggington can sense that his moment at ultimate glory is near.

The 27-year-old aims to do what former hard-hitting World Champions Julio Cesar Chavez Jr., Mike Alvarado and Cornelius Bundrage couldn’t do and be the first man to stop the granite-chinned warrior from Patzcuaro, Michoacán de Ocampo.

Eggington said, “The plan is to stop him. That’s plan A, I want the stoppage without a doubt. Plan B, I’m trained and ready to go twelve with him if I need to. They are the two eventualities I’m prepared for. With the way I fight I can’t see this going the distance. He comes to fight also and he’ll come straight to me so that will be perfect,”

“I haven’t watched too much of Molina, I leave that to my trainer Jon Pegg and my team, I’ve watched maybe 20 or 30 seconds of him here or there during the camp. I’m not a fan of studying fights intently, I just like to go in and do the business on the night. All I know is that he’s a Mexican, he’s a former World Champion, he’s fought some very good names and he’s got a solid chin, that’s all I need to know to get me fired up and I’ve got to be at my very best,”

“It will be real statement to the other middleweight champions, without a doubt. You don’t get to 50 fights against the level Molina’s been in with and not get stopped for no reason. So I definitely hope to change that. I believe it sends a message to rest of division, but one things for sure it will definitely make me feel better knowing that I was the first. The World title is in my thoughts but the most important thought right now is that I have to beat Molina otherwise it won’t happen. Simple.”

Presented by Hennessy Sports in association with William Hill, Infinitum, Numan, Everlast and King Carlos Promotions, Eggington v Molina will headline the exciting nine-fight card exclusively live and free-to-air across the UK and Ireland on Channel 5.

Also on the card, Coventry sensation River Wilson-Bent (8-0-0, 4 KO’s) makes the first defence of his Midlands Area Middleweight title against Derby’s George Farrell (5-0-0, 1 KO). Former British Light-Heavyweight Champion Shakan Pitters (14-1-0, 4 KO’s) has his first back against Bradford’s Jermaine Springer (7-2-0, 1 KO) in an eight-rounder since losing his title to Craig Richards last December. County Monaghan super-lightweight dynamo Stephen ‘The Hitman’ McKenna (7-0-0, 7 KO’s) features in a six-rounder, but the undefeated red-hot 24-year-old prospect has not needed to go the distance yet with all his fights ending inside. Birmingham middleweight bombshell Idris ‘The Bodybreaker’ Virgo (9-0-1, 1 KO) goes in over six-rounds. Sevenoaks all-action super-welterweight Michael Hennessy Jr. (5-1-1) is in a six-rounder against Warminster’s Paul Cummings. Irish super-welterweight ace Brett McGinty (1-0) follows up his thrilling pro debut last December when he features in a four-rounder against Islington’s Jordan Grannum. Brighton heavyweight talent Tommy Welch (1-0-0, 1 KO), son of the former British, Commonwealth and World Heavyweight title challenger Scott, follow’s up his explosive debut last December when he stopped Matt Gordon in the second round and features in a four-round contest.