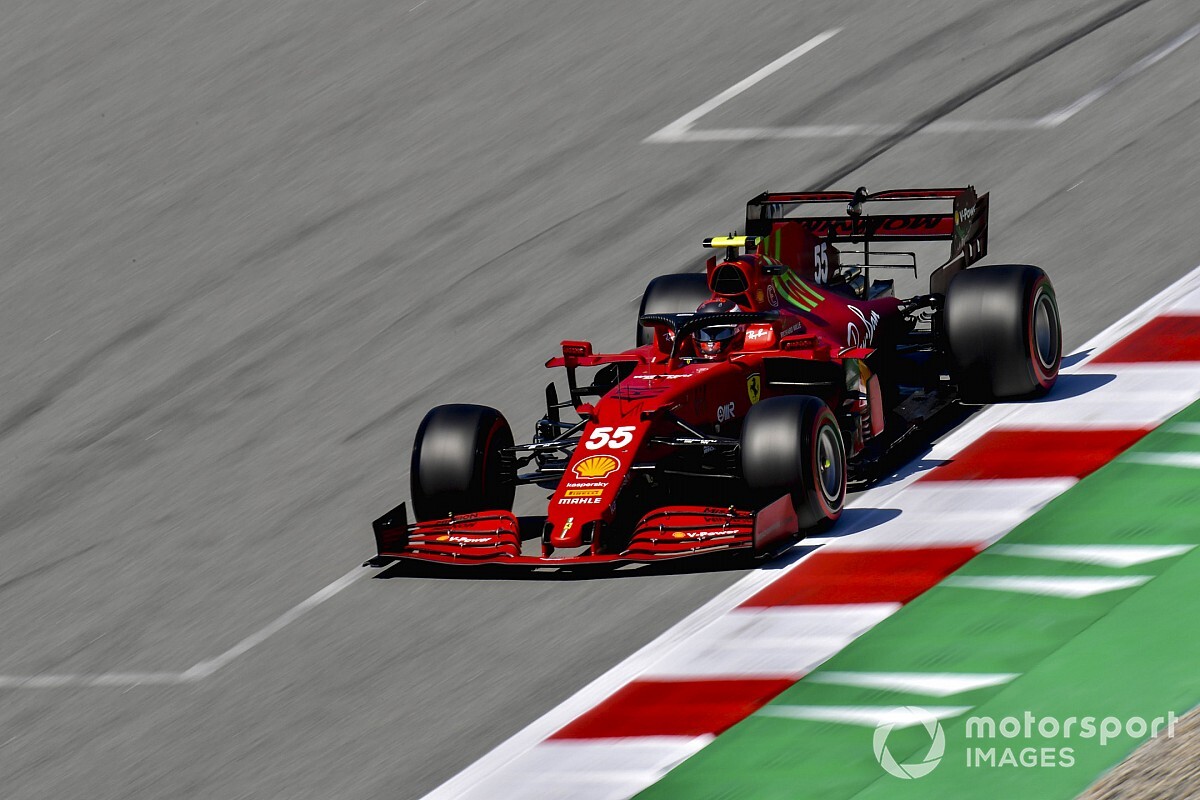 Sainz qualified sixth for his home race in Barcelona, two places and one tenth shy of teammate Charles Leclerc.

However last week in Portugal the red cars struggled on the medium tyres in the race. Sainz ultimately dropped out of the points to finish a frustrated 11th and admits Ferrari’s tyre management problem is likely to resurface during the Spanish Grand Prix.

“We are carrying a bit of a deficit into the race,” he said. “We know in tyre management we are we are not where we want to be still.

“In Portimao we struggled a lot, and we saw on Friday again that we don’t have the best of race pace and tyre deg.

“But at the same time if we get a good start, and we execute the strategy well, I still think we can finish in front of the rest.

“I think partly a bit less straight on this track is helping our relative competitiveness to be a bit higher. But as you can see, the last sector is working well, the car is working well in the corners, and we actually had a pretty decent balance all weekend.”

Expanding on prospects for the race he said: “I keep learning things and I keep implementing them when I go out on track.

“In qualifying quite a few things worked for me that worked for me in Portimao and now I’m trying to see what we can do tomorrow [Sunday], because tomorrow is our most complicated day, where we normally go a little bit backwards.

“In the race we still have tyre problems, and let’s see if tomorrow we can reduce that a little bit. The start here as you know, just like qualifying, is very important, and we’re going to try to go forward.”

Sainz has been gradually getting on top of his new car, especially in qualifying, and was ultimately disappointed to be outpaced by Leclerc when it mattered in Q3.

“To be honest, I was ahead in Q1 and Q2,” he said when asked about his qualifying performance by Motorsport.com.

“And even though I managed to save two sets of tyres for Q3, neither of the laps was the way I wanted them to be. I felt like today I could have been in front with with a couple of strong laps.

“But it wasn’t the case. I’m still struggling quite a lot in some types of corners that I cannot repeat, like in Turn 10 and Turn 7, struggling to feel the front.

“But the positive thing is that again in Q1 I did only one run, and that shows that the confidence is growing. And that I can actually be very fast when I nail the lap.”

Regarding his final Q3 run he added: “It was scruffier with the traffic, the car in front was closer. I believe I could have done a 1m17.4 both in the first and the second run. So I didn’t manage to do it, and it’s something to look into.”