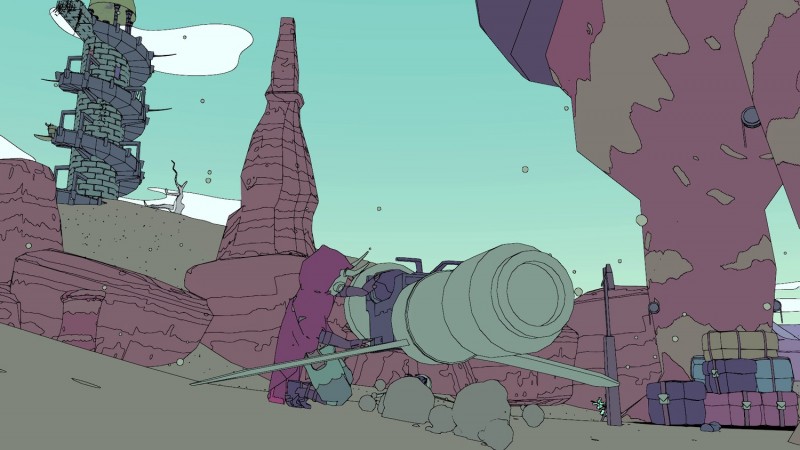 We’ve had our eye on Sable for some time now, as the striking aesthetic of the game has been captivating since its first reveal. At long last, the game has a release date. At today’s Summer Game Fest, we learned that the project will become available on September 23, 2021.

In the game, players take on the titular role as Sable pursues a rite of passage out in the desert, called her Gliding. There, she navigates stark landscapes of sand and rock, often onboard a fast-moving hoverbike.

In an interesting twist, the full game soundtrack is being crafted by Japanese Breakfast, and band head Michelle Zauner was on-hand to perform a song from the game, accompanied by footage of the game. She sung one of the songs composed for the game, called “Gliding,” and the unique set for the Summer Game Fest event allowed her to seem to be immersed in the sandy desert environs of the game as she sang.

Sable is also scheduled to be included as part of the Tribeca Games Showcase, and will appear there tomorrow, June 11, where it is an official selection of the long-running festival.

Sable is created by Shedworks, a small two-person game developer based in London.  The team has partnered with Raw Fury for publishing support on the project. The game will appear on PC as well as on Xbox consoles, and will be on Xbox Game Pass on day one.

To catch up on what else was shown during this year’s Summer Game Fest, be sure to check out our dedicated E3 2021 event hub for all of the latest announcements, watch-alongs, breakdowns, and more. You can also share your thoughts on Sable in the comment section below.