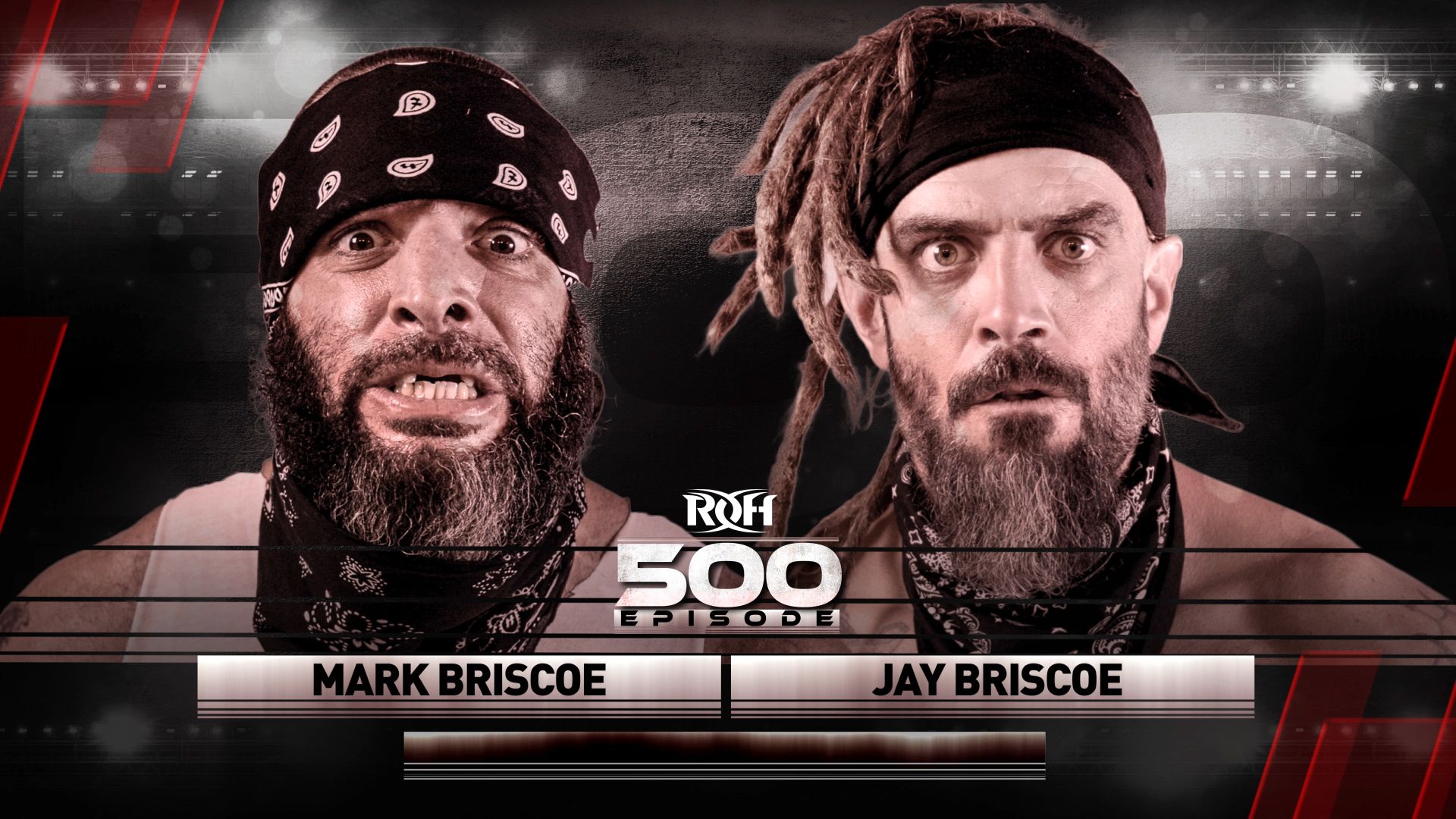 Reaching five hundred episodes is a noteworthy accomplishment for any television show, but it’s still wild that Ring Of Honor has been able to reach this massive milestone. Of course, this episode count is referring to the episodes of ROH TV under the Sinclair banner (not including the two years they were on HD Net from 2009 to 2011), but it’s still incredible nonetheless. The wrestling world was a much different place in September 2011, and ROH itself has undergone so many changes since that first episode. Starting in the Jim Cornette era, then moving into a bit of a rebuilding phase before they really gained steam in 2014-2015 (with the return of AJ Styles along with the New Japan partnership), then the prolonged exodus of talent to WWE coupled with another rebuilding phase in 2016-2017, then the Bullet Club/Elite era, and finally, the latest rebuilding phase which led into the current Pandemic Era of events. There always seemed to be changes every few years, but one of the constants throughout the last ten years has been that ROH has provided a reliably solid (quality varies from week to week, obviously) and easy to watch one hour television show each and every week.

The 500th Episode kicked off with a cool video package highlighting the last ten years of ROH TV before featuring the current crop of talent. I’m not sure who they’ve got working on the video packages in this company, but they always do a good job, whether it be for the PPV intros, or special occasions like this. That was followed by the usual intro from Quinn McKay, who introduced us to our two matches on this episode: Jonathan Gresham vs. Jay Lethal for the ROH Pure Title, and Jay Briscoe vs. Mark Briscoe.

Before the opening bout, we got comments from both Jay Lethal and Jonathan Gresham. I really love this format that ROH has come up with for their TV since the pandemic with the pre-match sit-down interviews. It’s something that I hope they keep as part of their TV once they’re able to run in front of crowds again. Anyway, this was a matchup selected by the fans (I believe on the ROH Facebook group), and Lethal talked about how he was conflicted when he heard about the match. While facing Jonathan Gresham has always been a great test and a strong learning experience for him, Lethal also knows that Gresham is dangerous and one of the best in the world. However, when he learned the Pure Title was going to be on the line, all those doubts and concerns went out the window. Lethal knows that he’s one of the best wrestlers on the planet, while also noting that Gresham will expect him to bring his best. He loves Gresham, but no matter who wins, what matters most is that the Pure Title will remain with The Foundation.

We also heard from Jonathan Gresham, who puts over Jay Lethal as someone who’s transcended the ROH World Title through his work in ROH over the years. Even without the ROH World Title, Lethal is still one of the best in the world, Gresham said. He’s proud to call Lethal a friend, proud to stand by him in The Foundation, and proud to give the fans what they want on ROH’s 500th Episode, with the Pure Title on the line. He said they will show the world what true Pure Wrestling is.

The entire Foundation came out together, with Tracy Williams and Rhett Titus remaining at ringside for the match. Ian Riccaboni was quick to mention the previous encounters these two have had in ROH (one of which was their fantastic Iron Man Match from ROH TV back in 2018). While Lethal came into this bout with an impeccable record in singles meetings against Gresham in ROH (5-1), his results in Pure Rules Matches are mixed (7-6). Meanwhile, Gresham is 8-0 in Pure Rules Matches (presumably since these COVID tapings started) and 9-0 in his last nine singles bouts. I love those stats that they provide during the entrances. It’s another thing that ROH should definitely carry over when they can run in front of crowds again. In this case, they really help to get over the fact that these two have different trends working for and/or against them.

As far as the match itself is concerned, the one thing I’ll say right out of the gate is that it’s not for everyone. There were no strikes exchanges at all, and it was very grapple heavy for the majority of the bout. It was definitely a match that would’ve fit right in on an EVOLVE show from five years ago, and again I could definitely see it being a polarizing match in the eyes of some. That being said, these two (particularly Gresham) pull off this style very well, and I felt the match was really good. Was it the best match these two have had together? No, but they did a very solid job putting together a compelling bout. There was a lot of back and forth in the first half, though we eventually got a significant turning point when Lethal nailed Gresham with a hammerlock back suplex. Gresham would do damage to Lethal’s arm, but this couldn’t prevent Lethal from forcing Gresham to slowly use up all three of his rope breaks. The coolest of those spots saw Lethal counter a Gresham hurricanrana attempt into a Boston Crab. Gresham was able to survive these setbacks, and emerged victorious in a very cool finish. Lethal tried to get out of a headscissors on the ground, but Gresham managed to grab onto Lethal’s leg when he tried to kip up, and trapped him for the pin. Another aspect of Gresham that’s so cool is that he wins in so many different ways, and this was definitely a finish that I had never seen before. The two shook hands afterwards, and all was well between them, since the title remained in The Foundation no matter what. ***3/4

Before the main event, we get a highlight package of the first main event of ROH TV, which saw Charlie Haas and Shelton Benjamin successfully defend the ROH World Tag Team Titles against The Kings Of Wrestling. An interesting trivia note with that match is that it was the final ROH bout for Claudio Castagnoli before he went off to WWE. A fun little look back at the first episode, which was a completely different era of ROH.

I mentioned earlier how I’m a big fan of the little stat graphics that ROH puts up during the entrances. Well, I have a minor bone to pick with whoever did the research on these. For Jay Briscoe, it said that he’s had four consecutive singles wins against his brother Mark. If you did a search on Cagematch, that would appear to be true. However, the stat card (and Cagematch as well, as it doesn’t come up in the search for some reason) forgets to mention the singles bout these two had at the Fifth Year Festival Finale in 2007. Now that match did end in a Double KO, so neither brother actually won, which means that Jay technically has won the last four Jay vs. Mark bouts that had a clear winner and loser. Still, I felt it necessary to make that correction for the record. Aside from that, an important note coming via those stat graphics is that Mark hasn’t scored a singles victory over Jay since their first match against each other in ROH back in 2002 at Honor Invades Boston. So in that regard, it’s very similar to the David Finlay/Jay White story in New Japan.

I was definitely looking forward to this one, since these Briscoe vs. Briscoe matches are pretty rare. When the dust settled, it definitely met my expectations. We all know that The Briscoes have lost a step compared to their prime ROH years, but they’re still really good wrestlers without question, and you knew that they were going to bring it in a singles bout against each other. They brawled in the ring, brawled on the floor, and didn’t hold back. The bout picked up a ton after a blockbuster to the floor by Mark. He went to use a chair to launch off of for a dive to the floor, but Jay cut him off, and nailed Mark with a huge Spicolli Driver on the open steel chair. This wasn’t billed as a No DQ Match, but I’m guessing the referee just let it go since it wasn’t actually used as a weapon.

From there, we got into the closing stretch which saw the two trade finishers. Jay was able to avoid Mark’s Cut-Throat Driver, but Mark was able to hit the Froggy Bow for a nearfall. Jay Briscoe then connected with a Jay Driller which led to a big kickout from Mark. Jay managed to hit another Jay Driller, but Mark rolled out of the ring to avoid getting pinned. They brawled on the floor for a bit, and that set up a huge spot where Mark put Jay on a table on the floor, and then put him through the table with a Froggy Bow off the top rope. Jay was unable to get back in the ring, so Mark won via count out. This was the first time that Mark had beaten Jay in a singles match since their first meeting in ROH in 2002. A count out doesn’t sound like an ideal finish on paper, but I felt it worked in this instance. Mark took out Jay with a huge move, and it damaged Jay too much for him to get back in the ring. I thought these two had a very enjoyable bout. As I said previously, The Briscoes aren’t the peak Briscoes that we knew from the glory days, but they’re still really good wrestlers, and bouts like this are proof of that. The two brothers shook hands and embraced as the show came to a close. ****

ROH celebrated its 500th Episode with two really strong matches that were completely different from each other. The main event was an action packed battle between two brothers, while the opener was a technical affair with the Pure Title at stake. If you’re someone who’s looking to get into the current ROH product, this episode serves as a great jumping off point. A very solid hour of wrestling television.