So, you want to be a MotoGP™ crew chief?

Watch out: profile images on Steam could contain malware

That’s why you do it. As a company that has been around for decades, WWE has built up perhaps the biggest video library in history. Throw in the fact that they have acquired all kinds of other video libraries over the years and the company has more video available than they know what to do with. It makes sense to showcase some of that video and it turns out that people are willing to pay to see that footage.

Comcast has released its first quarter financial report, during which it unveiled that Peacock has reached 42 million subscribers, including nine million new signups. There is no word on how many of these were on the paid or free tiers. WWE was not extensively mentioned in the announcement, with the only reference between a mention also involving the Office airing on the service.

WWE moved the WWE Network service over to the Peacock platform earlier in April, with the first major event on the platform being the second night of NXT Stand & Deliver. The two companies agreed to a deal in January with WWE moving its content over to Peacock for five years at a value of one billion dollars. WWE is hoping to have all of its content from WWE Network moved over to Peacock by Summerslam in August.

Opinion: I’m not sure what this is going to mean by comparison to other quarters, but the fact that WWE was credited whatsoever is a good sign. Above all else, WWE being mentioned in something like this is an encouraging sign as they are going to be as Comcast paid a lot of money to get the WWE content. Hopefully it winds up working, though the Peacock service still needs some adjustments.

What do you think of WWE on Peacock? What else do you want to see on the service? Let us know in the comments below. 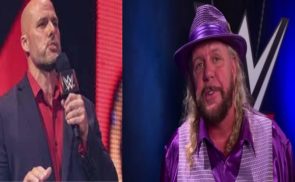 IMG Credit: WWEWelcome back/nice to meet you. Sometimes a wrestler needs a fresh coat of paint and it can be...

They’re up next. There are all kinds of stars on the NXT roster with so many options available to showcase...