McLaren will race in the heritage racing colours of sponsor Gulf at next week’s Monaco Grand Prix.

The team has revealed the one-off livery it will use for the race. It is based on the distinctive pale blue and orange colouring familiar from decades of Gulf-sponsored racing cars, dating back to the Ford GT40 endurance racers of the sixties.

The branding exercise will go far beyond the livery on the two MCL35Ms. Lando Norris will sport a complementary helmet in similar colours, and both he and team mate will wear new matching overalls.

“It’s going to be a complete Gulf McLaren Formula 1 team in Monaco from garage to race car to hospitality to uniforms,” McLaren Racing CEO Zak Brown said in response to a question from RaceFans when revealing the livery to media earlier this week. 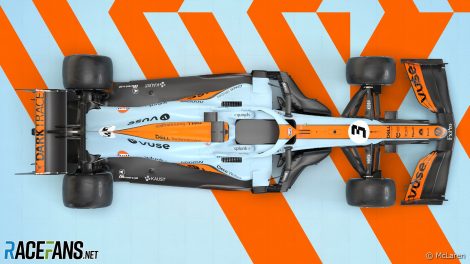 “I think it will look quite spectacular,” he added. “If you’re going to do it, do it right.”

Gulf Oil International CEO Mike Jones said they receive many requests from teams in different motor racing disciplines to use one of the sport’s most famous liveries.

“We have a clear colour palette for Gulf and it’s interesting because it’s iconic. ‘Iconic’ sometimes means ‘old’. I think the Gulf colours were way ahead of their time. If you think someone designed these colours in 1967, but they’re still relevant now.

“As a company we get many, many requests for racing teams to use it. And actually it’s a really special, iconic colour. So we only want to use it for special teams and I think that’s very much where we went.

“In terms of working with McLaren, really the McLaren design team came up with some ideas and we frankly, we left that to those guys because I think when those cars are travelling at that pace, we still want to retain the Gulf racing blue and the orange. 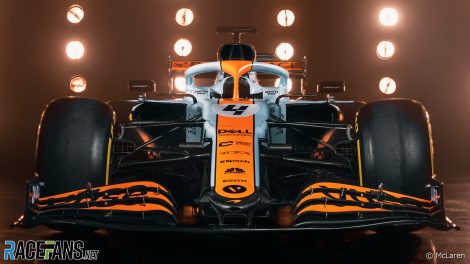 “But most importantly, I think it’s just absolutely stunning. You can imagine the nice weather in Monaco and the car going around. It’s really going to be a standout piece.”

Gulf joined McLaren as a sponsor last year, though its colours have been seen on their cars before. A McLaren F1 GTR Longtail finished second at Le Mans in 1997 in the same design.

Brown indicated the livery is likely to be a one-off for this year’s race only. “I think we want to keep it limited and special,” he said.

“So I think for the right reasons, the right brand alignment, the right venue – we have our 60th year anniversary coming up in a couple of years. And I hope other teams follow our lead because I think it’s going to be quite exciting.