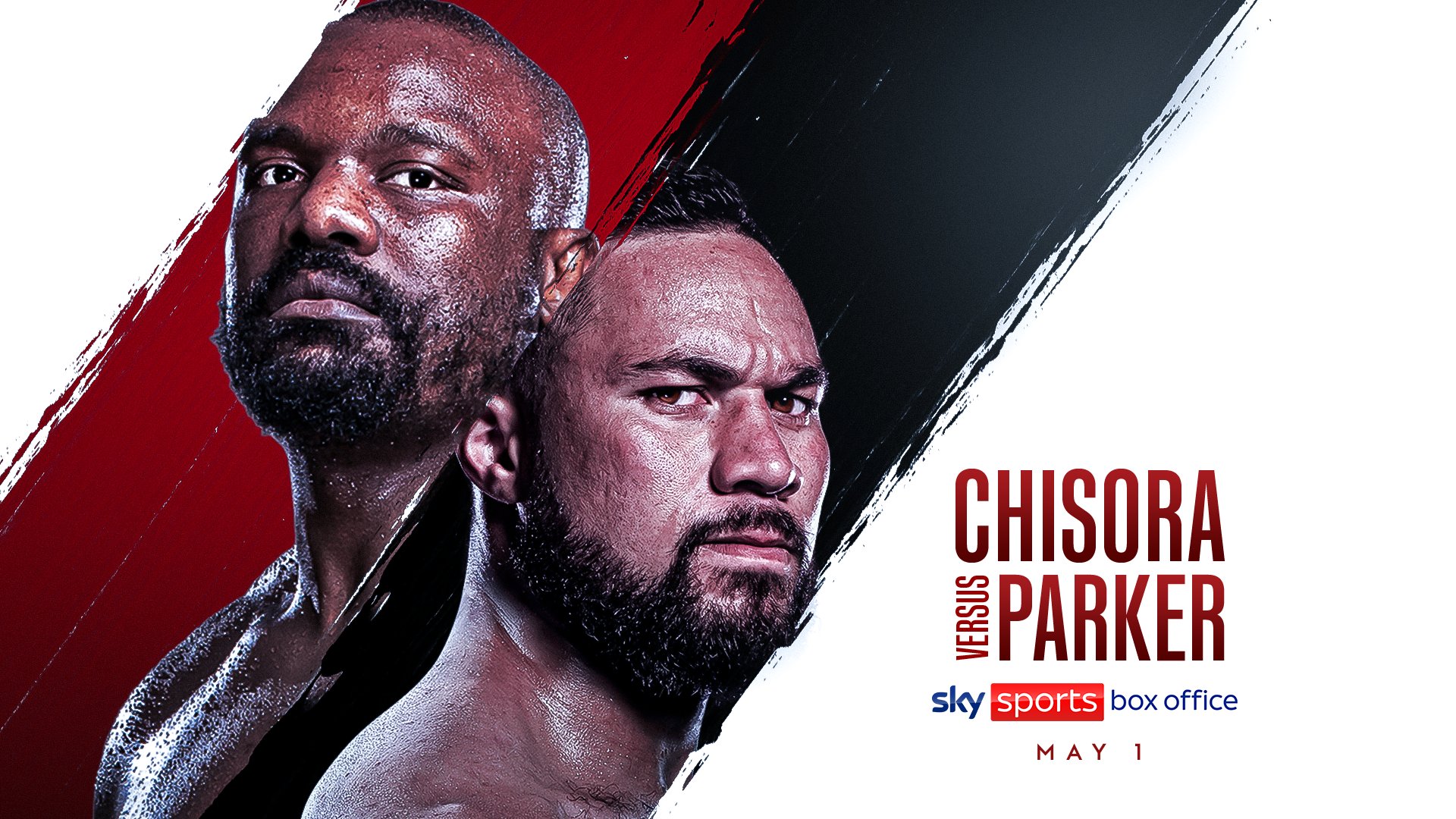 Derek Chisora and Joseph Parker will collide in a huge Heavyweight clash on a blockbuster night of action that sees Irish star Katie Taylor defend her Undisputed Lightweight crown against former amateur rival Natasha Jonas and undefeated WBA Light-Heavyweight World Champion Dmitry Bivol put his Title on the line against Craig Richards, as well as the return of Chris Eubank Jr, live on Sky Sports Box Office in the UK and on DAZN in all markets excluding the UK, Ireland, China, New Zealand and Samoa.

Former World Title challenger Chisora (32-10, 23 KOs) was last seen pushing Ukraine’s pound-for-pound star Oleksandr Usyk all of the way in their 12-round battle for the WBO Intercontinental Heavyweight Title at The SSE Arena, Wembley last October, and the fan favourite is chomping at the bit for his next challenge.

A meeting between the pair scheduled for October 2019 fell through at three-and-a-half weeks’ notice when Parker’s team revealed he was suffering from the aftereffects of a spider bite. Chisora, who was unconvinced with Team Parker’s reasons for pulling out in 2019, has labelled Parker a ‘chicken’ in recent weeks and says he has unfinished business with the Heavyweight contender.

Former WBO World Champion Parker (28-2, 21 KOs) is fresh off a hard-fought 12-round decision over long-time amateur nemesis Junior Fa at Spark Arena in Auckland, New Zealand last month that settled an 11-year old rivalry with his compatriot, a win that he hopes will kickstart his route back to the top of the Heavyweight division.

Ranked at No.3 with the WBO, New Zealand’s Parker is well known on these shores having defended his WBO Title against Hughie Fury at Manchester Arena in September 2017, before taking unified ruler Anthony Joshua the distance at the Principality Stadium in Cardiff in March 2018. His last appearance in the UK came against Dillian Whyte in a dramatic points loss in July 2018.

“We’ve been here before, in 2019 I flew to Vegas to film the ‘Face To Face’ with Parker, I called Haye as soon as I left and told him, ‘This guy isn’t going to get in the ring with me’, I could see the fear in his eyes,” said Chisora. “Now, second time around I hope he fights, I’m looking forward to the fight, I cannot wait to get back in the ring! I love fighting, it is what I love the most. Good luck to Joseph Parker and his new team, we shall see you for WAR on May 1st!”

“I’m excited to start this new chapter in my career with a new coach and some fresh ideas,” said Parker. “I’ve settled in and Andy and I are bonding well. Chisora and I have unfinished business and inside the ring one of us will get the job done. I am well aware that a win on British soil and on world-wide television will put me in pole position whereas a loss will be catastrophic. I am more than up for the challenge. Bring it on Del Boy.”

Taylor (17-0, 6 KOs) defeated Jonas (9-1-1, 7 KOs) in the quarter-final stages of the London 2012 Olympic Games on route to capturing Ireland’s first gold medal of the summer. The pair will meet again nearly ten years down the line with Taylor’s WBC, WBA, IBF, WBO and Ring Magazine Lightweight World Titles on the line.

Since their first meeting in the amateurs, Taylor has gone on to cement herself as the best female fighter on the planet by winning World Titles in the Lightweight and Super-Lightweight divisions and remaining undefeated in all 17 of her professional contests. ‘KT’ was last seen outclassing her WBA Mandatory Challenger Miriam Gutierrez with a masterful display in November.

‘Miss GB’ came agonisingly close to winning her first World Title at the age of 36 last summer when she battled to a thrilling draw with WBC and IBO Super-Featherweight Champion Terri Harper at Matchroom Fight Camp. It was the first time that two British women had competed against each other for a Word Title, and the all-action fight more than lived up to the occasion.

“Natasha proved in her last fight that she is still performing at the highest level so it’s a great challenge for me and I’m really looking forward to it,” said Taylor. “It’s a fight that people have been asking for and those are the type of fights you want to be part of.

“People still talk about our fight in the 2012 Olympics and I think that proved to be a real eye opener for people in terms of what women’s boxing is all about. I’m expecting another tough fight on May 1st and I’m looking forward to successfully defending my Titles.”

“I’m really excited about getting the fight, I made a lot of noise about not wanting to go down in level or class after establishing myself on the world stage in my last fight,” said Jonas. “I know Katie is a different type of animal to Terri Harper, but I believe every time I’m asked to step up, I do. I said I wanted to be a champion and anybody at 130 to 140 was in my sights, I know I’m a world class boxer and I can win a World Title.

“From the minute Eddie signed me this fight has been on the cards. Me and Katie had a great story from the Olympics, and we have both been pioneers in our own way. I’m glad that it’s happening and it’s a great fight for women’s boxing and for British and Irish boxing.”

Russia’s Bivol (17-0, 11 KOs) is regarded as one of the best technical boxers in the sport, mixing his dazzling skills with KO power. The 30-year-old was elevated to full WBA 175lbs World Champion from interim champion ahead of his 12th pro fight with Trent Broadhurst in Monte Carlo in November 2017 and celebrated with a devasting one-punch KO in the first round. Bivol has subsequently defended his crown five times, but has been away from the ring since October 2019 when he widely outpointed Lenin Castillo at the Wintrust Arena in Chicago.

Richards (16-1-1, 9 KOs) delivered a Fight of the Year contender last time out in December against fierce rival Shakan Pitters as he stopped the Birmingham man in nine rounds to earn the British Light-Heavyweight crown. ‘Spider’ is ranked at No.8 in the WBA world rankings and has earned his shot by remaining undefeated since sole career loss against former World Title challenger Frank Buglioni in October 2017.

“I have been out of the ring for a year and a half and I have sorely missed boxing,” said Bivol. “I can’t wait to step through the ropes for my next fight on May 1st. I have always wanted to fight in the UK and I’m happy to tick that box. Craig Richards is a fast and technical boxer and I’m expecting a great fight as I make another defence of my World Title.”

“I feel good and I feel very confident,” said Richards. “I know that he’s renowned as one of the best fighters out there, but I just believe that I’ve got the tools to beat him and I’m very confident in my abilities. I know I’ve got power as well, and I’ve got a very good chin. We’ve been planning for everything and anything.

“We know he’s been operating at world level for a long time and can bring different things to the table. I raise the level of my performance against my better opponents. The bigger the fight the better I perform. A fight like Bivol will allow me to go through my gears to show what I’m really about.”

Having previously campaigned at Super-Middleweight, Eubank Jr (29-2, 22 KOs) returned to the Middleweight division to claim the WBA Interim Middleweight World Title for the second time with a TKO win over former World Title challenger in December 2019, while making his US debut at the Barclays Centre in New York. In what will be his first fight back in the UK in over two years, the Brighton man faces Manchester’s Marcus Morrison (23-3, 16 KOs), who is enjoying a seven-fight winning streak that stretches back to June 2018.

“This is a good fight for me,” said Eubank Jr. “Since signing with Sauerland my camp has been firing on all cylinders, I’ve been training with Roy in Miami and focussing on improving my game. I have the absolute best people around me, I have everything I need to push on to that next level and dominate the Middleweight scene.

“People have a lot to say about me and my career. There’s talks about why fights haven’t happened previously, but all I’ve been doing is focussing on number one, training hard and making sure I’m always ready. I’m now in the best place I can be and I’m ready to take what is mine.”

“I’m well aware that this is a massive opportunity and fight for me and my career,” said Morrison. “I got into boxing at the age of 7, and these are the type of fights I’ve always wanted to be involved in. Chris is a very good fighter, and I know what he brings to the table. I honestly believe the best version of me is still to be seen, and I look forward to showing it on the night. I can’t afford to not leave everything in there on May 1.”

“This is one of the strongest shows we’ve promoted and there is still even more to come,” said promoter Eddie Hearn. “Chisora vs. Parker is a brilliant style match up that has been brewing for years and Taylor vs. Jonas is one of the biggest fights in women’s boxing. The Eubanks are always box office and it’s a massive chance for Marcus Morrison after his brilliant win in Italy. Craig Richards goes for World Title glory against the brilliant Russian Dmitry Bivol and there are further announcements to follow. Buckle up and enjoy this one!”

“WAR Chisora realises this is a massive opportunity to gate-crash the Heavyweight division,” said David Haye of Hayemaker Promotions. “He has come close, in his last battle against unified Cruiserweight World Champion and No.1 ranked Heavyweight Usyk, two of the judges’ score cards had it 7 rounds to 5 – winning just one more round would have captured a draw and Derek would have retained his WBO International Title that night. Since, he has been working, living the life of a professional. Derek doesn’t simply want to beat Joseph Parker, he wants to make a statement to the world. This is his time.”

“There’s definitely unfinished business between Parker and Chisora,” said David Higgins, Founder and Director of DUCO Events. “I think the fight will be a real fan pleaser. It could be the Heavyweight Fight of the Year. You’ve got Chisora who likes to stand and trade and come forward, and then you’ve got Parker who has the speed and the pedigree. This fight has got a bit of history and it has been building for a while. It’s fantastic that it’s finally happening. This is a proper 50-50 matchup where the winner could go on to a World Title shot and the loser will go to the scrapheap. Credit to both Parker and Chisora for putting it all on the line.”

Next post [VIDEO] SEBASTIAN FUNDORA SHRUGS AT “NORMAL SIZE” COTA; RAW ON PATH TO CHARLO TITLES AND MAYWEATHER VS. PAUL