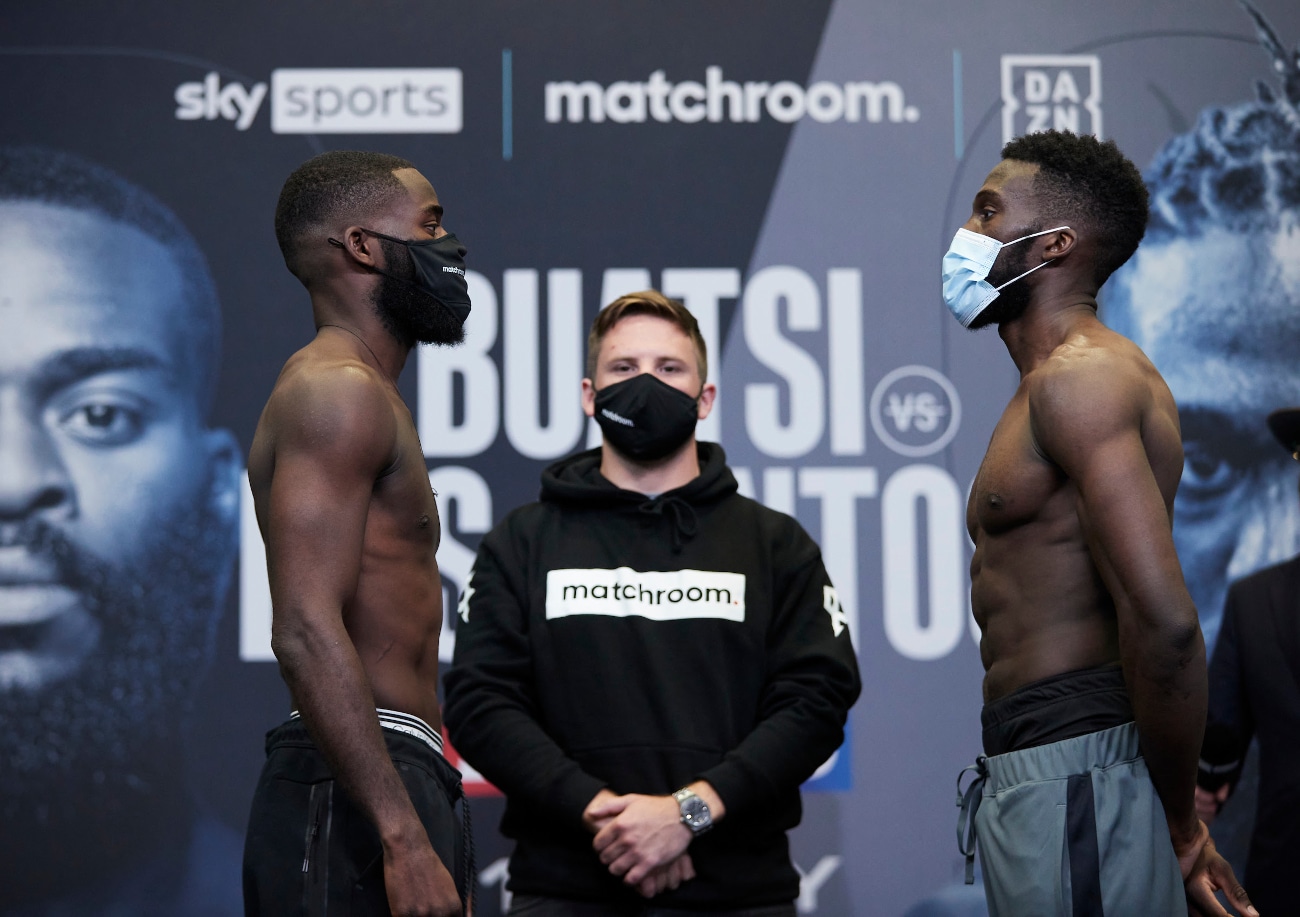 By Charles Brun: Unbeaten light heavyweight contender Joshua Buatsi weighed in at 174 pounds on Friday for his 10-round headliner fight against little-known French fighter Daniel Blenda Dos Santos this Saturday night at the Manchester Arena in Manchester, England. The fight will be shown on DAZN and Sky.

The 30-year-old Dos Santos weighed in at 172 3/4 lbs for his match against the heavy favorite Buatsi. What’s unknown is why Matchroom decided to pit the 28-year-old Olympian Buatsi against Dos Santos rather than a contender, as this is clearly a step down for him from his last fight against Marko Calic last October.

Buatsi is supposed to be fighting better opposition because he’s getting up there in age approaching his 29th birthday. He needs to cut his teeth on actual contenders to show Matchroom whether he’s got the goods to go anywhere in the sport or not.

Buatsi isn’t going to be able to show his promoters anything as long as he’s matched against second-tier opposition like Dos Santos or Calic.

It’s quite possible that Buatsi is intentionally being brought along slower than you’d normally see from an Olympic so that they can wait until IBF/WBC light heavyweight champion Artur Beterbiev ages to the point where he’s beatable.

Once Beterbiev reaches a certain age, Buatsi will likely be given the green light to fight him. Beterbiev is currently 36.

“There’s not much footage of him, so I’ve got to go in there and find out,” said Buatsi to iFL TV about his opponent Dos Santos. “He’s a good opponent, 15-0. I think he said he was a soldier and then ended up in prison and boxing saved his life.

“Many of us can say that. It’s got the ingredients for a good fight, I feel, so we’ll see what happens. When you get in, it’s boxing, grit, and determination,” Buatsi said about his clash with the 33-year-old Dos Santos.

“You can’t say too much about the fight until it happens. Obviously, I’m going in there with my mindset that I’m coming out on top, and so is he,” said Buatsi.

That’s obviously a bad sign that Buatsi can’t find many videos of Dos Santos’s past fights because that suggests that this is just ham & egger bring brought in to make him look good. Fans can judge for themselves, though.

With a resume like Dos Santos, it’s obvious that Buatsi is being put in a showcase fight this Saturday rather than one that will help build his career.

Next post Mass Effect Legendary Edition Has A Calibration Menu