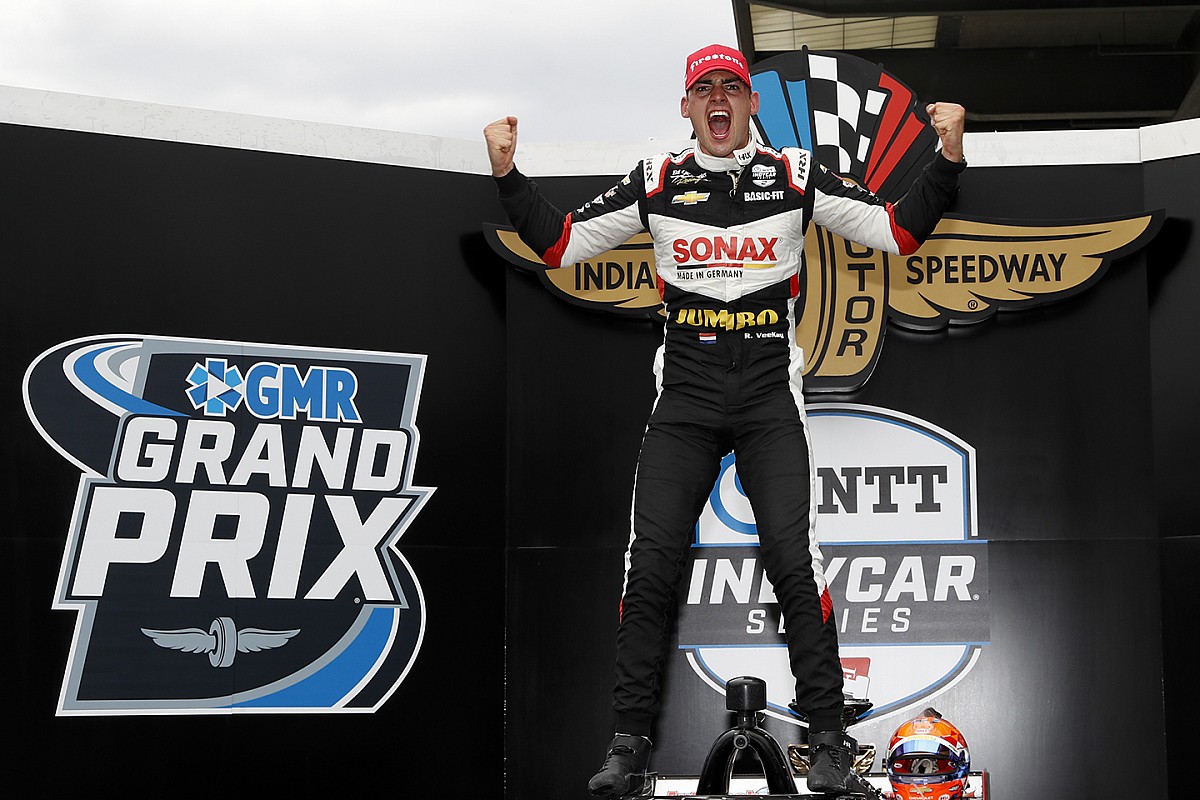 Pole-winner Grosjean held his own at the start, Jack Harvey following him into second in the Meyer Shank Racing-Honda to beat Team Penske-Chevrolet’s Josef Newgarden ahead of Alex Palou (Ganassi-Honda), Scott McLaughlin (Penske) and Rinus VeeKay.

However, VeeKay’s Ed Carpenter Racing-Chevrolet teammate was less lucky, getting tagged and sent onto the grass by Simon Pagenaud’s Penske-Chevy.

The resulting kerfuffle sent Pato O’Ward into the runoff zone, while Alexander Rossi and Felix Rosenqvist took to the grass. Scott Dixon narrowly avoided being collected but fell to 19th and so chose the consequent yellow flag period to get off the less favored primary Firestones and onto the reds. Graham Rahal and Pato O’Ward did the same thing.

Grosjean got on the gas early for the restart on Lap 4, with Harvey, Newgarden, Palou, McLaughlin, VeeKay, Colton Herta holding station as the top seven. However, Dale Coyne Racing with Vasser-Sullivan’s Ed Jones deposed Pagenaud through the Turn 1 and 2 sequence, ahead of Will Power and Felix Rosenqvist. Jones’ momentum on reds meant he could also pass primary-tired Herta for seventh on Lap 6, as Ryan Hunter-Reay passed Marcus Ericsson for 12th. Next time by, he zapped Rosenqvist too, the Andretti Autosport driver also taking advantage of his red tires.

Grosjean had grown his lead to 2sec by Lap 7, as Harvey on primaries was working hard to hold off Newgarden and Palou on reds.

Grosjean was therefore leading Palou – by 6.5sec – with Jones and Hunter-Reay in third and fourth, the only cars yet to stop. Dixon, who had pitted under caution after the start, was now fifth.

Although Harvey had rejoined behind Newgarden, the MSR driver was now on reds, and Newgarden was on blacks, and passed him on the back straight. Two laps later, VeeKay also got around Newgarden to claim ninth.

Among the not-yet-stopped cars out front, Palou cut Grosjean’s lead down to 4.6sec when the Frenchman got held up slightly while lapping Montoya.

Jones in the second Coyne car ducked into the pits at the end of Lap 21, but Grosjean had shown there was still plenty of life in his first set of reds by edging back away from Palou by Lap 22, to the tune of 5.3sec, with Hunter-Reay a further 16sec back, 2sec ahead of Dixon until pitting on Lap 24. Further back, Power was struggling, getting passed by Ericsson on the back straight and Rossi at Turn 1 in successive laps and dropping to 15th.

Grosjean finally pitted at the end of Lap 25 for more reds, while Palou also stopped and took on blacks. That made him easy prey for the charging Harvey, who crossed the start-finish line just 2sec behind Grosjean next time by, a gap that held steady once Grosjean got his reds up to temp. The pair were 11sec adrift of off-strategy Dixon who stopped at the end of Lap 27 and rejoined 18th.

Grosjean started to edge away from Harvey by Lap 30 of the 85-lap race, only a tenth or two at a time, but it meant on Lap 33 the leader’s advantage was 3.6sec. Palou was doing a fine job only 4.5sec further back on primaries, having survived an early post-pitstop attack by VeeKay. Six seconds further down was Newgarden (on primaries) with a three second advantage over McLaughlin who had Herta and Pagenaud filing his mirrors.

In fact it was Pagenaud who made the first move in this bunch, passing Herta around the outside into Turn 7 on Lap 36. At the same time, VeeKay stopped for a second time. This triggered a flood of stops, but Harvey’s great run was suddenly over, as the car appeared to be dropped before the right-rear was secured. Not only was the stop a long one, still the job wasn’t done and he had to do a long slow lap with a right-rear puncture.

Grosjean had an alarming moment as he lapped Takuma Sato, banging wheels with the RLL driver, while a far cleaner move occurred moments later. Palou was inadvertently held up by teammate Jimmie Johnson as they departed pitlane. It cost Palou momentum onto the back straight and VeeKay took the opportunity to drive between the Ganassi drivers and claim fourth.

Grosjean, who had fallen back behind Sato after an aggressive unlapping maneuver, stopped on Lap 43, but it wasn’t a stellar stop and he was now on primaries, making him vulnerable to the charging VeeKay. The ECR driver stalked him throughout Lap 44, and then dived inside at the right-handed Turn 12 and held it to grab the (net) lead. The only cars ahead were off-strategy cars of Hunter-Reay – nine seconds ahead – and Dixon. The six-time champ stopped on Lap 46, RHR on Lap 48. Dixon would emerge 13th, behind Power, while Hunter-Reay was just ahead of the Aussie in 11th.

Grosjean had fallen 2.5sec behind VeeKay even before he ran long at Turn 1 and trimmed the grass on Lap 48, so next time by the rookie’s deficit to the sophomore was out to 3.7sec. More concerning for the Coyne team was that Palou was only 1.5sec adrift. However, Grosjean steadied himself and pulled a couple of tenths on the Spanish Ganassi driver next time by, and lost only a couple of tenths to VeeKay over the next lap.

Then Grosjean and Palou started trimming VeeKay’s lead as the Dutchman’s reds went off, and by Lap 57 Grosjean was only 2.2sec from the lead, with Palou 1.4sec further behind.

Eight seconds behind Palou was Newgarden just ahead of Rahal. McLaughlin in sixth on blacks had a line of alternate-tired cars behind him, including Pagenaud, Herta, Rossi, Ericsson, Hunter-Reay, Power, Dixon and Jones.

Rahal made his final stop on Lap 57, Rossi stopped on 59, but leader VeeKay stayed out until Lap 60, while Grosjean went to the end of Lap 63 and emerged 5sec behind the ECR-Chevy. Palou had fallen out of the lead battle having had a problem on the right rear wheel at his final stop, and was now six seconds behind Grosjean, and only three seconds ahead of Newgarden.

Now the drama ramped up still further as rain had started to spatter across the track, although it looked like a simple outbraking mistake that sent Herta long at Turn 1 while under pressure from the recently stopped Dixon who was now into ninth. Further around, Herta was then nudged off the track at Turn 7 by Ericsson as they ran side by side, and the St. Pete winner fell to 13th.

Up front, Grosjean appeared to have no answer for VeeKay, the pair 7.8sec apart with 15 laps to go. Some 6sec further back, Palou – who made the rare choice of running a second stint on primaries – was starting to feel pressure from Newgarden, Penske’s two-time champ drawing to 1.6sec away.

Rahal was 14.5 down in fifth, trying to hold off Pagenaud, and Rossi who was complaining about a down-on-power engine had a 2sec margin over the for eighth between McLaughlin, Dixon and Ericsson.

VeeKay went into the final five laps with an 8sec lead over Grosjean, while Palou continued to hold off Newgarden in third. VeeKay eased off in the final couple of laps, apparently low on fuel, and his eventual winning margin was 4.95sec.

Palou successfully held off Newgarden to claim the final podium spot, while despite a flapping right sidepod, Rahal remained ahead of Pagenaud. Rossi was seventh ahead of McLaughlin who kept his hero Dixon in his mirrors, while Ericsson completed the Top 10 ahead of Power and Hunter-Reay.

The F1 tyre tricks that new clampdown will stamp out

The Northern Talent Cup saddles up for the Sachsenring