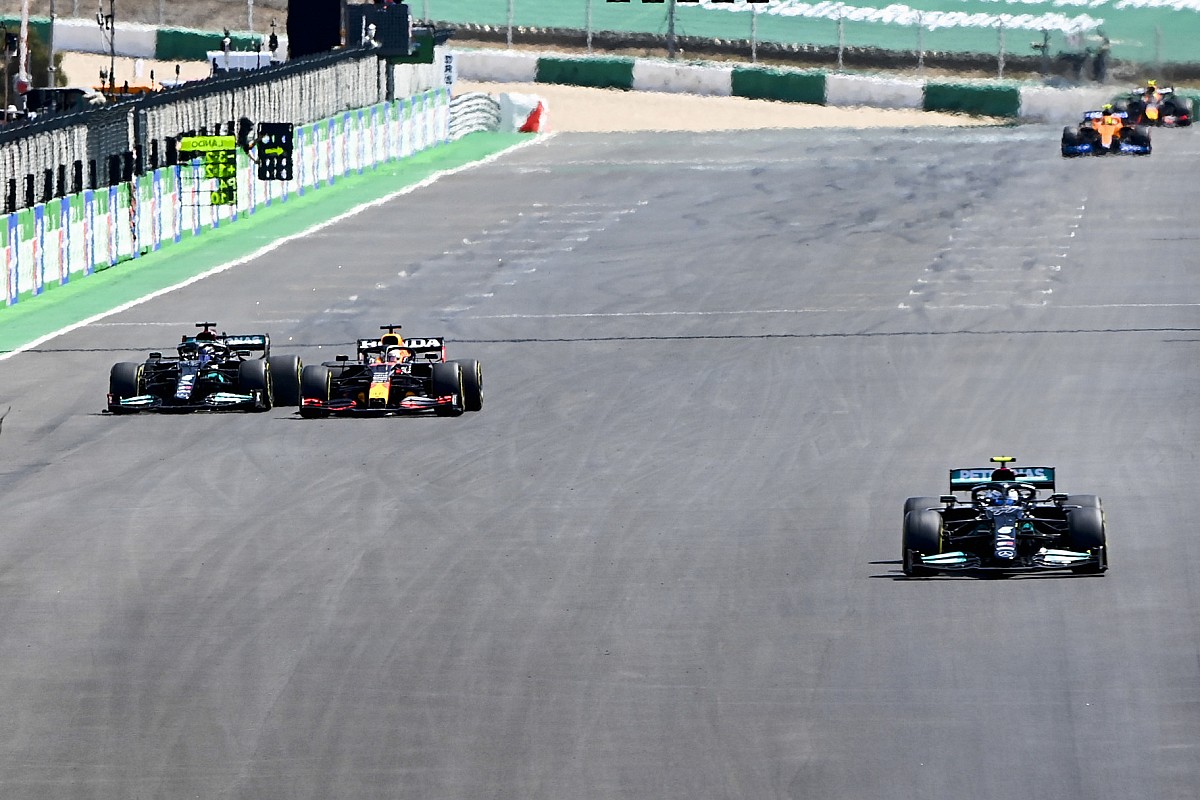 Bottas led from pole position, ahead of teammate Hamilton and Red Bull’s Verstappen. After a safety car was required, as Alfa Romeo’s Kimi Raikkonen hit his teammate Antonio Giovinazzi, covering the track in debris from his front wing, Verstappen jumped ahead of Hamilton to grab second place at the restart.

But Hamilton quickly repassed him, after Verstappen made an error, and Lewis then grabbed the lead from Bottas with a spectacular move just before one-third distance.

Verstappen passed Bottas for second after their pitstops, when Valtteri slid wide on his new hard tyres, but had nothing for Hamilton, who was well clear out front and cruised to victory.

What happened in the Portuguese Grand Prix?

From pole position, Bottas led Hamilton and Verstappen, with Ferrari’s Caros Sainz jumping past the Red Bull of Sergio Perez for fourth. Behind them, Lando Norris (McLaren) and Esteban Ocon (Alpine) fought out a huge battle for sixth, swapping the position repeatedly around the first lap, with Norris finally making it stick.

Raikkonen lost his front wing at the start of lap two, driving straight into the rear-left wheel of his teammate Giovinazzi, covering the track in debris. That required a safety car intervention to clear it up.

At the restart, Bottas backed the pack up which allowed Verstappen to get a run on Hamilton and grab second at Turn 1. Sainz fell back to sixth, as Norris passed Perez at Turn 5 – leaping up to fourth.

The top three pulled well clear, with Verstappen closing in on leader Bottas as DRS was activated on Lap 10. But a mistake from Verstappen on Turn 14 allowed Hamilton to get a run on him into Turn 1 on the following lap, and Hamilton repassed him, then shoving Max wide at Turn 3 as Verstappen tried to respond.

Verstappen fell away by 2 seconds before regrouping and catching up again. Perez repassed Norris for fourth on Lap 15, as Hamilton hounded Bottas for the lead.

After stalking him for five laps, Hamilton got a DRS-assisted run and made a bold around-the-outside pass on Bottas at Turn 1 on Lap 20 to take the lead. Hamilton then extended a 3.5-second lead by half distance, as Verstappen got stuck behind Bottas.

Sainz was the first of the top six to pit, like Norris having started on the soft tyre, and switched to mediums. Norris pitted a lap later, and after a relatively slow stop, he immediately came under attack from Sainz – but managed to fend him off. Ferrari then pitted Charles Leclerc from fifth, switching him to the hard tyre.

Verstappen pitted for hard tyres on Lap 36 in an effort to undercut Bottas, who pitted a lap later and covered him. Bottas slid wide exiting Turn 3 and Verstappen passed him at Turn 5. Hamilton also pitted, and maintained a 3s lead over Verstappen, with Bottas falling a further 3s behind Verstappen.

Perez stayed out and ran long, holding the lead despite reporting a vibration – and almost tripping over a wayward Nikita Mazepin (Haas) as he lapped him. Bottas raised his pace in the final third of the race, closing the gap to Verstappen as Hamilton pulled away.

Hamilton passed Perez on track to retake the lead, just before the Mexican made his stop for soft tyres on Lap 52, Perez rejoining fourth. Hamilton cruised to the win from there, well clear of Verstappen, Bottas (who was hampered by an exhaust sensor issue late on) and the distant Perez.

Bottas made a late pitstop for fresh hard tyres, and grabbed fastest lap away from Perez, but Verstappen also pitted and opted for softs, and took it back on the final lap – until it was taken away for exceeding track limits at Turn 14, to the extra point went to Bottas.

Norris finished fifth, ahead of Leclerc. The Ferraris switched positions on Lap 39, and Sainz lost a further place to Ocon with 21 laps remaining. The second Alpine of Fernando Alonso also enjoyed a good race, passing McLaren’s Daniel Ricciardo and Sainz to snatch eighth place in the closing stages. Ricciardo finished ninth ahead of Pierre Gasly (AlphaTauri) both passing Sainz, who limped home 11th after an extremely long run on mediums.