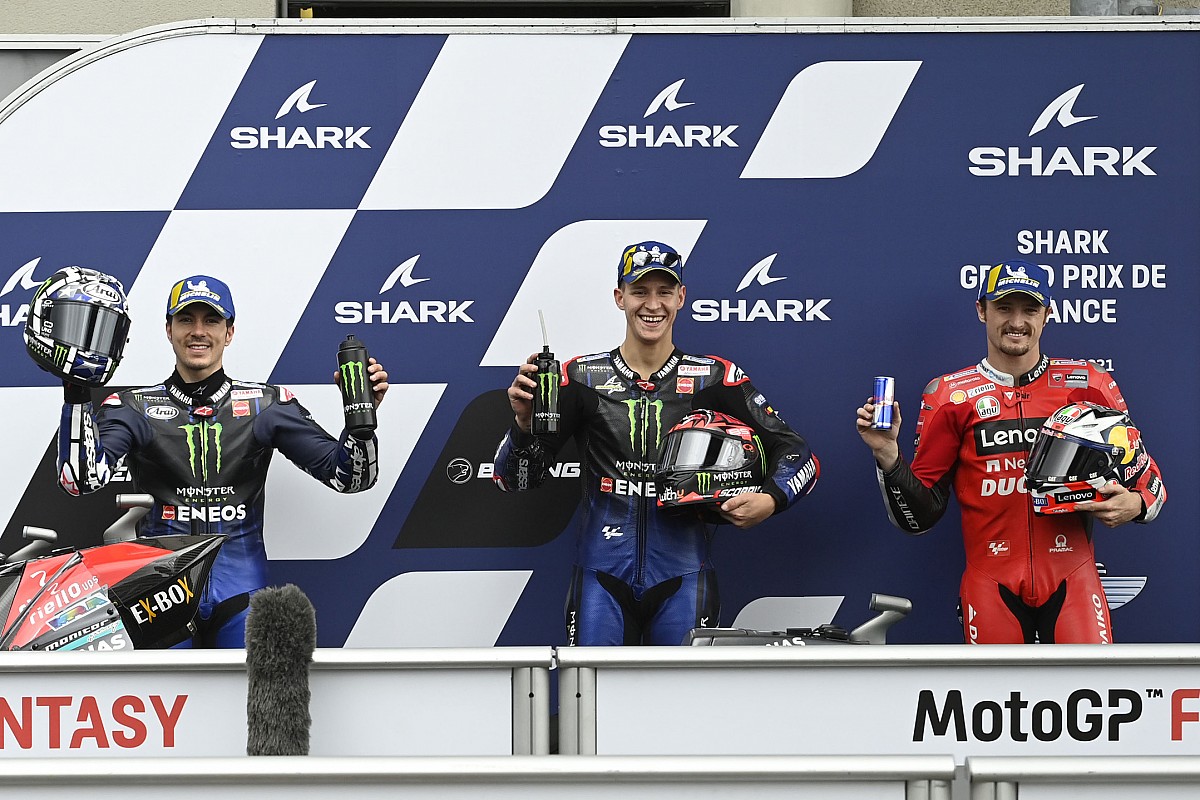 Pole looked set to go to Marc Marquez as spots of rain appeared in the latter stages, but the top six changed right at the death as a number of riders found lap time in the conditions.

Q1 was completed on wet tyres, but the track had dried enough for the start of the pole shootout session to prompt the Petronas SRT duo of Valentino Rossi and Franco Morbidelli to start straight away on slicks.

But the gamble for Rossi backfired as a near-highside at the final corner on a lap set to put him top of the pile early on sent him into the gravel.

At the same time, Ducati’s Jack Miller lit up the timing screens having switched to slicks moments earlier to take over at the top of the pile with a 1m35.472s, which he improved to a 1m34.374s next time around.

Johann Zarco on the Pramac Ducati set the initial session benchmark on wet tyres and returned to top spot on slicks with five minutes remaining with a 1m34.211s.

But this lasted just seconds as Honda’s Pol Espargaro blitzed this with a 1m33.150s, before Honda teammate Marc Marquez shot to the top of the pile with a 1m33.037s.

As Marquez set that lap, yellow flags in the third sector were being shown for a crash for KTM’s Miguel Oliveira while rain in the first sector was falling.

This looked set to lock Marquez into a stunning first pole since 2019, heading a Honda 1-2-3 from LCR’s Takaaki Nakagami and Espargaro.

But conditions cleared enough at the death and the timing screens began to light up again, with Maverick Vinales first to break Honda hearts with a 1m32.681s.

Quartararo was going even quicker behind him, however, and found 0.081 seconds to snatch his third-successive pole of 2021.

Miller found a 1m32.704s at the end to complete the front row ahead of Morbidelli and Zarco, while Marquez was shuffled back to sixth at the chequered flag.

Nakagami heads row three in seventh ahead of Espargaro, who crashed right at the end while on a quick lap. Rossi will start ninth.

Oliveira’s late crash left him in 10th ahead of surprise Q1 graduate Lorenzo Savadori on the Aprilia and Avintia rookie Luca Marini, who followed Savadori through Q1.

Aleix Espargaro on the sister Aprilia went top just seconds before the chequered flag, but prematurely celebrated his effort and was caught out by the late improvements for teammate Savadori and Marini.

Espargaro will start 13th ahead of the Suzuki duo of world champion Mir and Rins, both of whom setting the Q1 pace in the first half of the session.

Championship leader Bagnaia added his name the list of high-profile riders unable to escape Q1, the Ducati rider only able to go 16th quickest ahead of 2020 Le Mans winner Petrucci.

His Tech 3 KTM teammate Iker Lecuona will start 18th ahead of LCR’s Alex Marquez, who crashed late on, as did Pramac’s Tito Rabat in 20th.