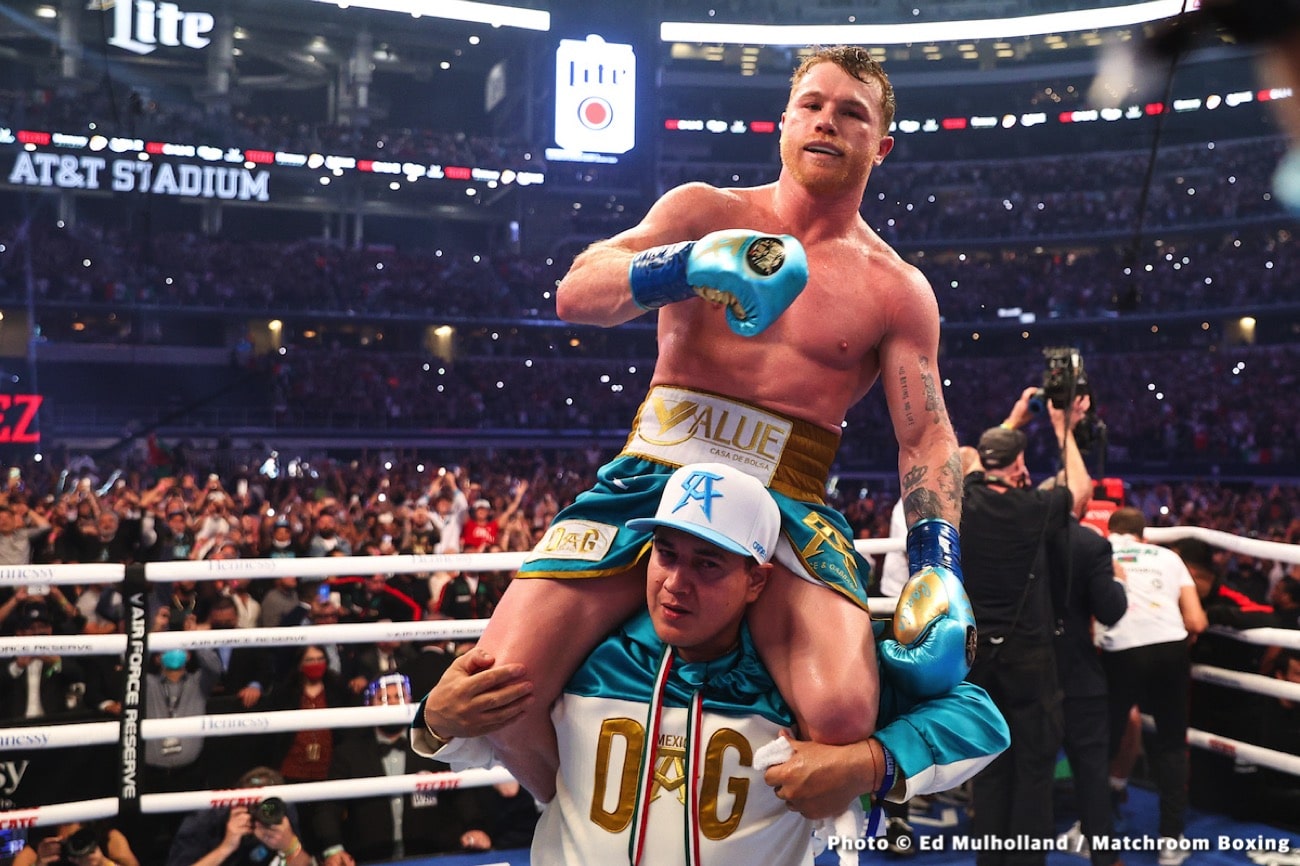 By Joseph Hirsch: You have to laugh when you hear someone begin a sentence, “Canelo Alvarez, arguably the pound-for-pound best boxer on the planet…” I suppose you could still argue about it (sports fans can argue about anything, especially when they’ve got a couple beers in them), but it’s getting to be like arguing about whether the Earth is round.

I’ll cop to being wrong about Canelo a couple of times. If you want a good laugh, go back and read the piece I wrote, Billy Joe Saunders: A punchable Face but not a very hittable Face. Not only didn’t my prediction age well, but even the title didn’t age well, considering Billy left the ring with a fractured orbital bone. That face turned out not only to be hittable, but breakable.

Canelo may not be the most naturally talented boxer alive, and there are other elite fighters who arguably have more athletic ability (especially when it comes to stamina). But those fighters aren’t making the big fights. Take Erroll Spence and Terence Crawford, still on star-crossed paths and unlikely to meet before either or both are out of their primes, or they take loses and the fight loses some of its mystique. Other fighters on the cusp of greatness still need more performances to make a claim to the crown Canelo wears, like the young but already complete Teofimo Lopez.

There are some who’ll argue that if Tyson Fury unifies against Anthony Joshua he should be number one. But the pound-for-pound list was created to give fighters from historically less glamorous divisions a chance to be mentioned in the same breath as the heavyweights, not to brevet the big boys with even more laurels. Besides which, activity has to be factored into the equation. And while Tyson has a historic upset win (against Klitschko) to his name and a memorable demolition of another champ (Deontay Wilder), he has had long stretches of inactivity. Tyson’s ability to overcome his addictions, his demons, and to shed the kilos is commendable, but it hurts him in any pound-for-pound discussion.

Canelo, meanwhile, has been on a multi-division tear from junior welterweight to light-heavyweight. He’s fought slick Cuban southpaws and battered heavy-handed Russian punchers into submission. In that time, he’s suffered one loss, and it happened when he was still fairly young and inexperienced, and it came at the hands of an all-time great.

It sounds good, until you realize that he’s only thirty years-old, and then it sounds even better. Age is relative in this sport, but he is a young thirty. Thanks to an ability to slip most big punches and roll with the rest, he has taken precious little punishment. And even when he takes a shot flush on the button he has demonstrated a granite chin, right up there with former dance partner Gennady Golovkin, or heck, George Chuvalo.

No idol of Fistiana has had the boxing world so totally in the palm of his gloved hand since “Sugar” Ray Leonard. Canelo has yet to master the art of public relations the way Ray did, but he’s picked up some English in downtime between rounds of sparring and hours of roadwork. He displayed his new facility with the language recently, when he peppered WBO titlist Demetrius Andrade with abuse after “Boo Boo” tried to hijack his presser to taunt the champ into giving him a fight.

Boxing fans are naturally asking themselves what’s next for Canelo, and are also asking if any boxer out there currently fighting in and around his weight presents a significant challenge to him. No boxer is indestructible and upsets happen all the time, but you can go broke betting against Alvarez.

Speculation is brewing now that IBF titleholder Caleb Plant is up next. This would give Canelo a chance to unify at supermiddleweight, which, while less storied than other divisions (it’s a newer invention) would still further cement his legacy.

If the fight comes off, I’ll wish Caleb “Sweet Hands” Plant the best of luck in the match, and I’ll tune in (I’ve got DAZN, after all). But I have a hard time envisioning how Plant pulls off that upset. “Sweet Hands” is a pure boxer with a very good backfoot game and a jab steady as a metronome. He breaks well at the waist, puts together fluid combinations, and slips most of the hurtful punches. Plant also has an inspiring life story, overcoming serious hardships in his personal life, in addition to being a solid example of the scientific “hit-and-don’t get hit” style.

But everything Plant does well, Billy Joe Saunders did better.

A sublime pure boxer without a lot of pop might be able to keep Canelo at bay and outbox him from the outside for twelve rounds. But this would have to be someone of the caliber of a Pernell Whitaker, Willy Pep, or a Benny Leonard, a once-in-a-generation phenom. That ain’t Plant.

Canelo has had stamina issues in the past, flagging in the last four stanzas of the fight, but the pressure he applies before the championship rounds is usually more than enough to carry the day down the homestretch. Put simply: you must have enough power to make Canelo respect you, a la Triple G, or his ability to walk you down, stalk you, and apply pressure will eventually break you. For Canelo and his two trainers, the Reynoso’s, it isn’t even necessary to go back to the drawing board to come up with a new gameplan in order to beat Plant. The playbook they used on Billy Joe will work just fine. Plant likes to duck low and find an exit, and Canelo knows how to perfectly time an uppercut to punish anyone trying to make that move.

More challenging fights are out there for Canelo than the Plant one, though, if he wants them. Hardcore heads like ESPN analyst and former rapper Max Kellerman are salivating over the prospect of Canelo returning to light-heavyweight and making a fight against unified WBC-IBF champ, Artur Beterbiev.

The fight makes sense for all kinds of reasons. Beterbiev is a murderously heavy puncher (no one has survived twelve bells with him) with a deep amateur pedigree. He’s a naturally much bigger man than Canelo, as well. In short, he’s everything we hoped Sergey “Krusher” Kovalev would still prove to be when he stepped into the ring with Alvarez in Saul’s maiden voyage to 175 lbs.

Canelo’s win over Kovalev should not be minimized. It was an impressive knockout against a man whose jab still had more poleaxing force than most men’s power shots. But Kovalev, while not a shot fighter by any stretch of the imagination, had lost some of his luster after a brace of losses to Andre “S.O.G.” Ward, and another, devastating KO loss to Eleider Alvarez. When he fought Canelo his personal life was in shambles, and the rumors coming out of camp, confirmed later by John David Jackson, were that Kovalev was essentially untrainable. You can’t cut corners in camp before a Canelo fight, even if you’re the naturally bigger man.

Beterbiev is arguably a shade past prime, but he’s close enough to his peak that if Canelo were to beat him, he would have established a greater beachhead in the division than he did when he beat Kovalev. And considering Beterbiev is probably the best of the current crop of elite light-heavies, if Canelo beat him it would be more than likely that Canelo would unify the division. Neither the heavy-handed but plodding Joe Smith Jr. or the technically sound but somewhat mechanical Dmitry Bivol are as fearsome as boogeyman Beterbiev.

Between Dmitry Bivol and Joe Smith Jr., Bivol definitely presents the harder challenge. Smith still throws wide and gets frustrated when things don’t go his way, and in fact he seems to have gone backwards in development since his career-best win against Eleider Alvarez, who he actually outboxed in spots with eye-catching combos.

But when you consider the structure of Bivol’s face, with the high placement of his cheekbones, he seems custom-built to suffer swelling and thus impaired vision after Canelo lands enough heavy leather to the head. Also, Bivol’s cyborglike calm tends to see him stay in second gear even during fights he’s winning. If the knockout presents itself, he’ll take it, but he’s content to box and go rounds. In short, he has yet to show he has enough dog in him to take Canelo. In order to pull off the upset, Bivol will need to bring out that instinctive intangible that tells a boxer when to box and when to fight. Golovkin came closer than anybody else to beating the improved Canelo (and I think he did win their first fight) because he could match Canelo with in-ring machismo as well as technical skill.

Ironically, though, it’s Bivol’s Eastern Bloc amateur style of jabbing from middle distance and pacing himself that might give him a chance to capitalize on Canelo’s one remaining weakness, the tendency to fade in the final rounds.

That’s all speculative at this point, though, and in the future.

For now Canelo has earned his rest. He deserves this time to enjoy the spoils of war, to be with his family and to play with all the expensive toys he’s accumulated on his way to the top of a very hard business.

But (and this is a big but) if he were to step up to light-heavy and clean out the division, the conversation would then have to pivot from the pound-for-pound arguments to Canelo’s place among all-time greats. He’s already honestly there, and fans who would have considered it heresy only a couple of years ago are mentioning Canelo in the same breath as Julio Caesar Chavez.

If Canelo retired tomorrow, he would be a first ballot Hall of Famer. But each additional win against a credible opponent, every step up in weight or closer to unification, helps push his name from the periphery to the center of the conversation of the greatest.

Sorehead oldster fans and armchair boxing historians will always complain you can’t mention Canelo in the same breath as all-time greats like Archie Moore or Harry Greb, men who had sometimes two or three times as many fights as Canelo. But it’s unrealistic to think in this era of super-fights and cross-promotional issues that an elite-level boxer can barnstorm across the country and rattle off forty-five wins in a year, as Harry “the Pittsburgh Windmill” once did.

The days when the fans and promoters could make such demands on fighters are long-gone, and it’s a good thing that the fighters have a little more power now. It gives them a better chance to “get out with their wits and their winnings,” as Chris “Simply the Best” Eubank once had it.

Regardless of what Canelo does next, though, I think they’re getting ready to chisel another likeness from a block of stone up there in Boxing’s Mount Olympus, that pantheon for all-time greats that includes names like Roberto Duran and Henry Armstrong. You gotta feel for the sculptor, though. It’s no doubt hard to carve freckles in stone.