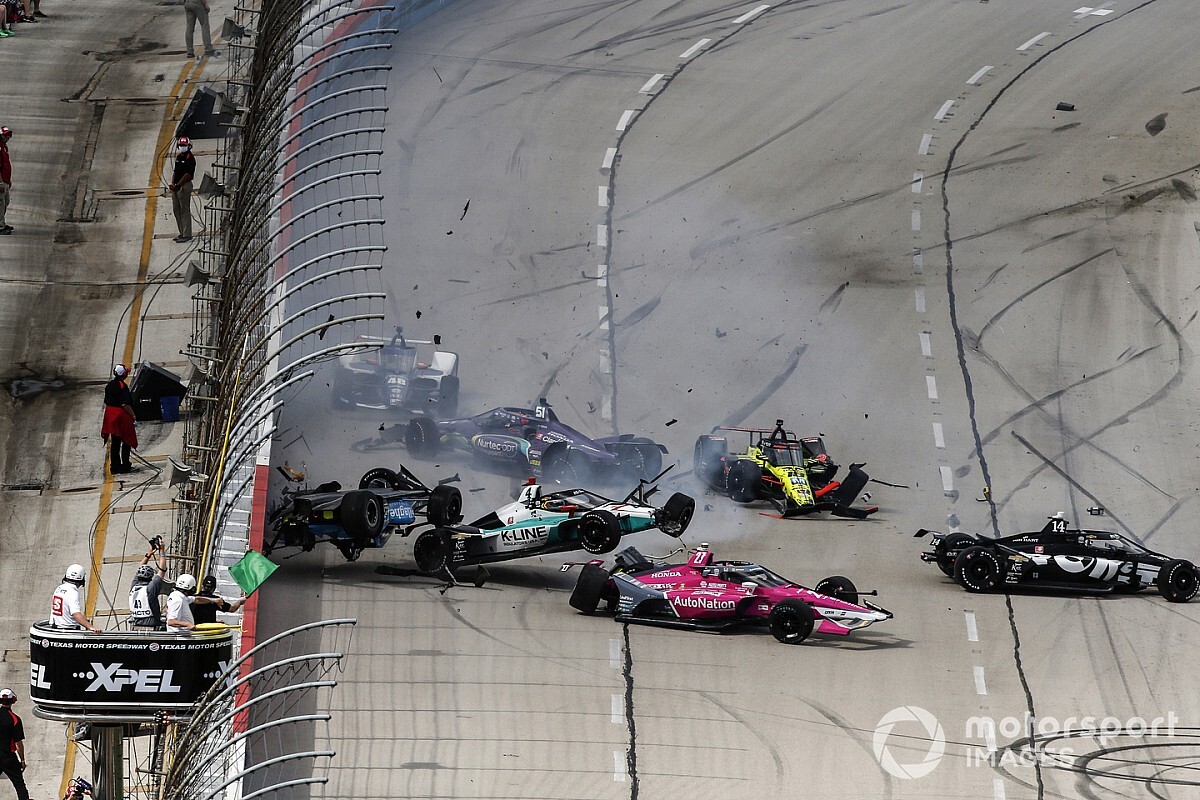 In Saturday evening’s race, Sebastien Bourdais was running seventh when he braked in reaction to Colton Herta slowing in front of him, heading for pitlane. Immediately behind Bourdais, Team Penske’s Josef Newgarden was caught by surprise and tapped the #14 AJ Foyt Racing-Chevrolet into a spin that sent the 37-time race-winner hard into the SAFER barrier on the outside of Turn 2.

Bourdais’ teammate Dalton Kellett at least managed to finish on the lead lap, albeit last, and that would be as good as it got for the squad.

With the second race, like the first, set by championship points due to the cancelation of qualifying, and with Bourdais having dropped from seventh to 14th due to the Saturday DNF, he was more vulnerable at the start of the race. As they were rolling toward the green flag, Dale Coyne Racing-Honda’s Pietro Fittipaldi hit Bourdais knocking him into a spin that collected Alexander Rossi’s Andretti Autosport machine. The melee would also eliminate Conor Daly (Carlin), Ed Jones (Coyne) and Kellett.

Foyt told Motorsport.com: “To lose the #14 both nights was just unbelievable. On Saturday the guys worked until midnight and came in early on Sunday to fix it, and then to see both cars torn up before they even go to the start line…

“It was an expensive weekend for sure. I’d say half-a-million bucks…$500k to $600k, I’d say. You always have to have potential accident damage built into your budgets, and we have a good number of parts because we’re ramping up to run four cars at Indy, with J.R. [Hildebrand] and Charlie [Kimball] joining us.

“But still, it’s a lot of work, a lot of parts and pieces we need to re-stock.

“Thankfully those were our two road course cars converted to oval trim, not any of the four cars slated for Indy, and the monocoques were fine so we’ll be able to strip em down and get them ready for the Indy road course next week.”

Although Bourdais’ backed hard into the SAFER barrier on Saturday, Foyt said the engine had survived without damage.

“Yeah, it was a big hit but the engine was OK and the majority of the gearbox seemed to survive that one,” he said. “Believe it or not, I think he got more damage on Sunday even though the cars weren’t up to speed yet. Just the way Seb got hit, it definitely broke the spools in the gearbox, and unfortunately he got a second hit from his teammate, Dalton, who had nowhere to go because he was half on the grass already trying to go around him.

“No, I get that IndyCar were doing their best to get the cars out in practice on Saturday. And if we’d run a qualifying session Sunday morning and you had a big issue, that means you could miss the race as well.”

He did say, however, that IndyCar would need to look at start procedures, whether some cars were varying their speed on the run to the green flag, that caused a ripple effect toward the back of the pack.

“I honestly haven’t examined the footage to see what caused all that,” he said. “As I recall, as they got the one [formation] lap to go, the field was still pretty spread out so I think maybe those guys at the very back were carrying pretty good speed there, trying to get caught up going into that start.

“But it’s something that needs to be looked at because there were a lot of cars torn up there and that’s not a good look for the series.”