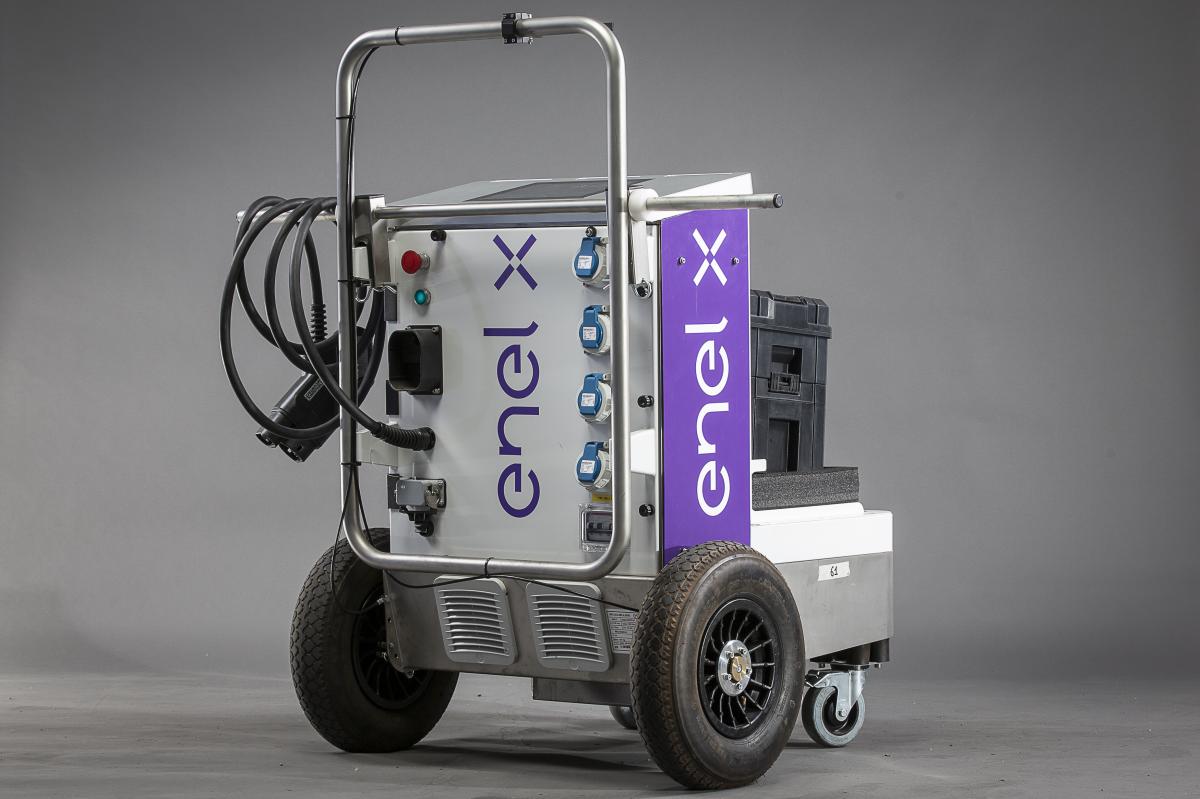 Enel X, the Official Smart Charging Partner of the FIM Enel MotoE™ World Cup, has launched the JuiceRoll Race Edition, the new charging infrastructure specifically designed and developed for MotoE™, that will be used starting from the first race of the third season of the Cup, which is set to take place at the Circuito de Jerez-Angel Nieto on the 2nd of May. The JuiceRoll Race Edition is a highly innovative racing charger with internal storage and two interconnectable units, namely a Semi-Mobile Unit (SMU) and a Mobile Unit (MU); this device can charge an electric motorbike in about 40 minutes.

The SMU, located in the charging area of the ePaddock, is a semi-mobile unit with a 50 kW DC output, an AC input from the grid of up to 22 kW and a 51 kWh embedded storage system. Additional energy can be secured through sixty 3Sun bifacial solar panels, for a total installed capacity of 21 kWp, mounted in the charging area. Thanks to this overall system, encompassing storage alongside photovoltaics, the power input requested from the grid during charging is limited to 4-5 kW under normal operating conditions. The MU is a moveable 10 kW DC charger, powered by the SMU and equipped with a 6 kWh embedded storage system that enables the unit to top up the bikes while in the pit lane and starting grid. Specifically, the MU enables a seven-minute final charge on the starting grid, allowing the bikes to cover a greater distance than in previous seasons.

During the charging session in the ePaddock, the JuiceRoll Race Edition can supply the bikes with up to as much as 1 MW spread across 20 chargers, requesting only 100 kW from the solar panels and the grid under normal operating conditions, thanks to the chargers’ embedded storage system. If needed, the batteries allow the chargers to work without grid connection, as they are able to compensate any power drops or blackouts from the grid and still safely charge the bikes.

Other new, distinctive features of the JuiceRoll Race Edition include:

•    The MU can power electric tyre warmers while in the ePaddock, pit lane and starting grid as well as during transfers between these areas, as keeping tyres warm is key for optimal bike performance

•    The overall system is remotely monitored and controlled, managing power loads in order to optimise electricity supply from the grid

The JuiceRoll Race Edition replaces the JuicePump 50 used in the first and second seasons of the FIM Enel MotoE™ World Cup.

Francesco Venturini, CEO of Enel X: “We are proud to launch a new smart charger for the FIM Enel MotoE World Cup, underscoring our commitment to developing innovative technologies for eMotorsports. This state-of-the-art device requires less power from the grid thanks to its embedded storage system while ensuring more energy for the race through a mobile charging unit that can top up the bikes also in the starting grid. Overall, we consider eMotorsports as a laboratory for smart charging technologies, with the aim to bring innovation from the racetrack to the street. We develop solutions to make motorsports more sustainable, while maintaining the same level of performance and competitiveness.”