Aprilia has scored just six top six finishes in the modern MotoGP era. The latest of those came two weeks ago in Portugal, courtesy of an in-form Aleix Espargaro aboard an RS-GP that looked like a genuinely competent package for the first time.

A strong Friday showing at Jerez for the Spanish Grand Prix, which Espargaro ended third fastest, teases the prospect that for the first time the Spaniard could make a legitimate challenge for the podium on Sunday.

“I’m satisfied about day one, but the good thing is it looks like Aprilia and Aleix is working well everywhere we go,” Espargaro enthused when Motorsport.com asked if the Spanish GP could be ‘the big one’ for Aprilia.

“So, it’s not about one single track. The track is a bit slippery, so after all first day, all riders in every single track will put more rubber down on track. I think the things may change a little bit, but why not [aim for the podium]? I feel good, so let’s see.”

It’s not the first time Espargaro has placed Aprilia’s potential at a lofty standard. During the Jerez double-header last season, he genuinely felt the RS-GP was a lot closer to the podium than it ultimately ended up. But the Aprilia of 2020, which Espargaro regularly called the best bike produced by the Italian marque that he’d ever ridden, was fragile, slow in a straightline and lacked acceleration.

Aprilia has been able to take profit of the fact it is deemed a concession manufacturer – a title bestowed upon its return to MotoGP in 2015, which it so far hasn’t been able to shake due to a lack of podium potential. But with all other marques observing engine development freezes over the winter (except KTM, having lost concessions last year) and into the new campaign (KTM included in this instance), Aprilia has been able to arrive into 2021 with an all-new bike. 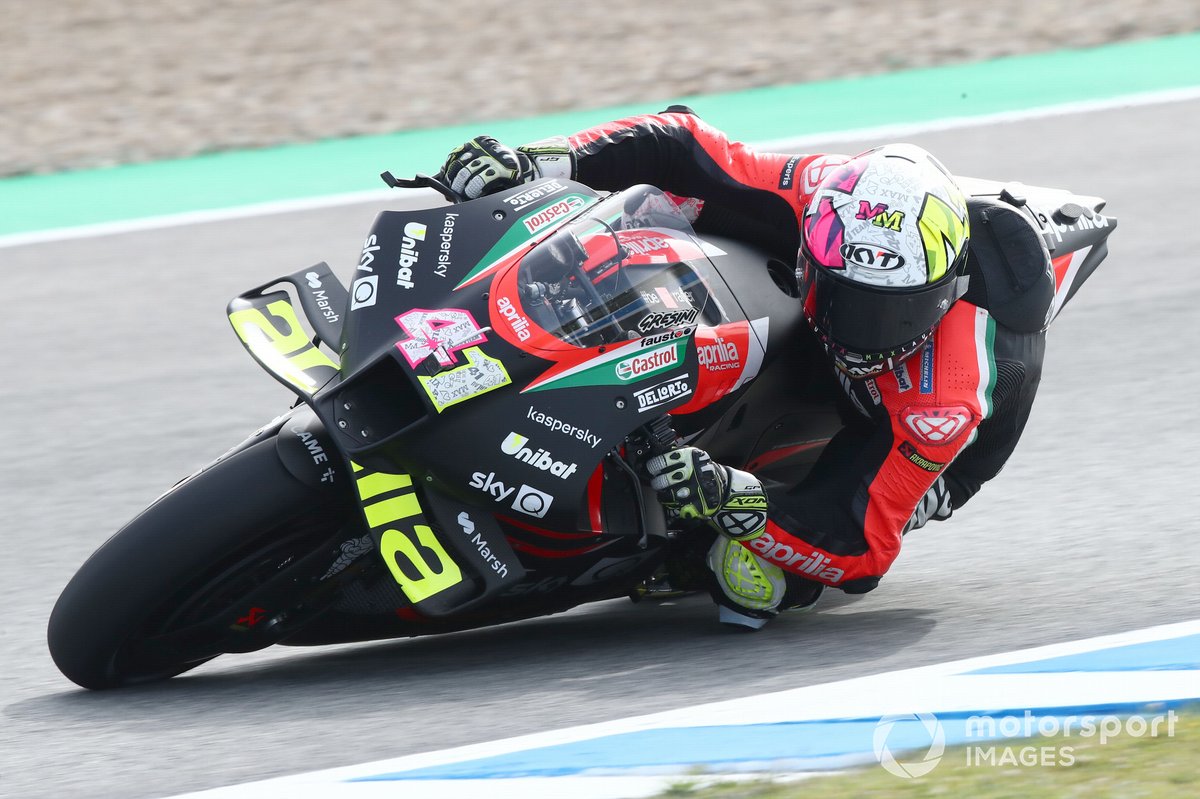 Espargaro beamed over all the areas it had improved ahead of Qatar pre-season testing in March, which included better acceleration chiefly.

The absence of any long straights at Jerez – its longest blast a mere 607m – plays into Aprilia’s hands, as its new engine still lacks peak power, as does the fact the circuit requires a bike to be good under acceleration.

Espargaro displayed his solid pace over one-lap on Friday, ending up second in FP1 and third overall after firing in a 1m37.646s at the end of FP2. That put him 0.437 seconds behind pacesetter Francesco Bagnaia on his Ducati, a gap somewhat exaggerated by the Italian’s epic time attack capabilities in 2021.

The absence of any long straights at Jerez – its longest blast a mere 607m – plays into Aprilia’s hands as its new engine still lacks peak power, as does the fact the circuit requires a bike to be good under acceleration

But it was Espargaro’s work on medium rubber in FP2 which really turned heads. His initial pace was solid, the Aprilia rider completing four laps in a row ranging from a 1m38.023s (dipping underneath the existing race lap record set by Marc Marquez in 2019 on a Honda) and 1m38.553s.

This wasn’t as quick as championship leader Fabio Quartararo, who on his Yamaha on the same rear tyre did five laps ranging from 1m37.993s to 1m38.292s on his first run. As has been proven time and time again, the Yamaha when it can run its own lines free of traffic is mighty. The Aprilia, meanwhile, in the early stages of races this season has struggled a little bit on a full fuel load. Espargaro’s first run reflected this.

But it was his second run on a medium tyre with seven laps on it where Espargaro really shone. Completing four flying laps in that run, on tours two, three and four, Espargaro managed to log a 1m37.948s, 1m37.892s and 1m37.977s. Quartararo, by contrast, did five flying laps on his second run with a medium compound that had eight laps on it, but didn’t manage a 1m37s once – his best effort of that set was a 1m38.261s. 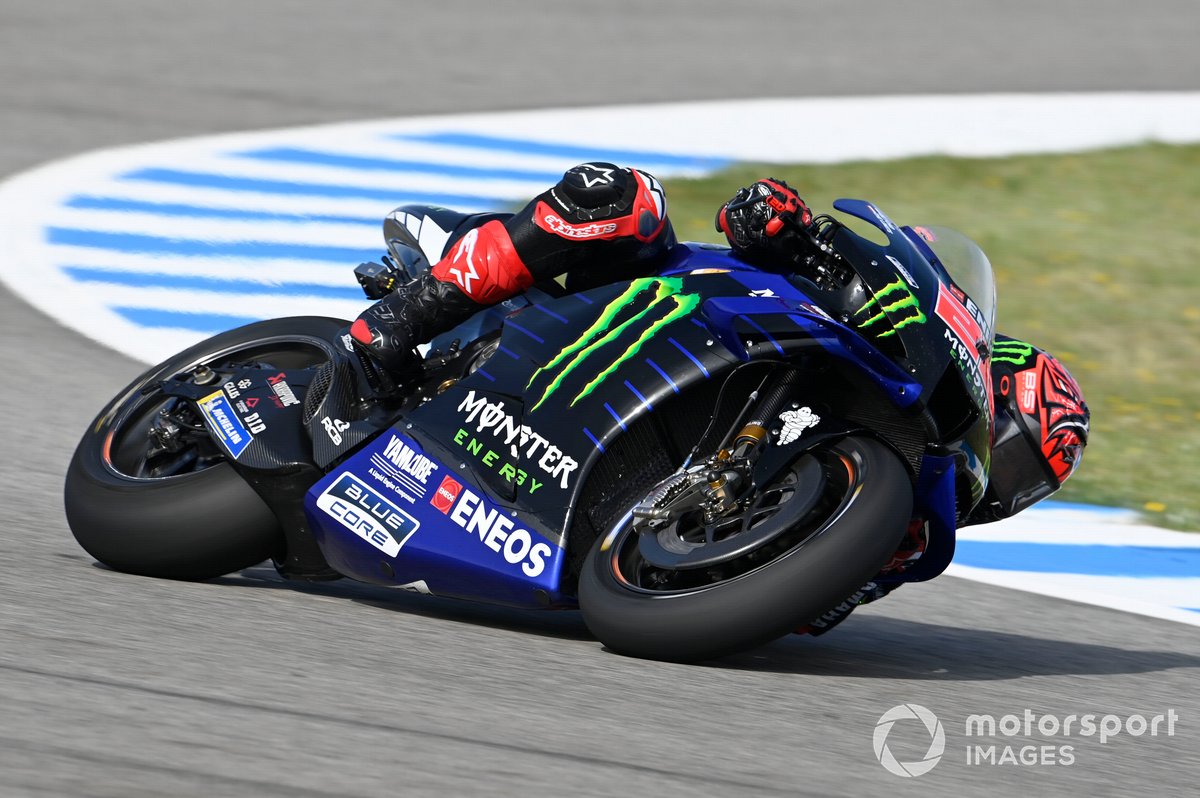 “Let’s say I was a little bit conservative with the new tyres, but with used tyres they have something more than us,” Quartararo said after ending Friday second overall. “First of all, I’m feeling confident on the bike and I feel like we have a great idea for a change tomorrow because we saw there was something – not wrong, but not correct. So I think we need to make a change, but I feel great on the bike and looking forward to tomorrow.”

Quartararo is the man of the moment in MotoGP, having won the previous two grands prix in commanding fashion. Few would write off him tallying up a third this weekend, especially at a circuit he has a love affair with in MotoGP. Jerez was the scene of his first pole in his 2019 rookie campaign and his first victories in 2020, when he scored back-to-back wins to kick-start the COVID-delayed season.

In something of a warning to the rest, Quartararo noted “honestly, today I felt exactly the same as last year [at Jerez]” and is convinced the Yamaha will only go quicker with added grip on track come Saturday.

Espargaro is under no illusion that the Yamahas won’t be there, but rightly points out that currently it’s the rest who have to make gains on race pace – and not him – on Saturday.

“For sure everybody will get closer, we know how close always it is in Jerez,” he said. “But apart from one hot lap, yes, I think we have good pace. Also, for me it was a little bit shocking when I had more than 10 laps on the tyre and I was able to lap in 1m37s every lap.

“I felt very good and this will give me motivation for the race because I’m sure that especially the Yamahas, maybe Suzukis, will get closer tomorrow. But it’s difficult to go a lot faster than 1m37s on race pace. Already in day one we are able to lap in 1m37s on used tyres, so they have to improve more than me.”

Espargaro has some Jerez miles under his belt from private tests in February, but notes the advantage he has from that is small given how much the RS-GP has come on since then. And when you consider HRC wildcard Stefan Bradl was only 11th after Friday, having – as Espargaro put it – basically lived at Jerez in the winter carrying out testing, Aprilia’s form at the Spanish GP so far is given more credence. 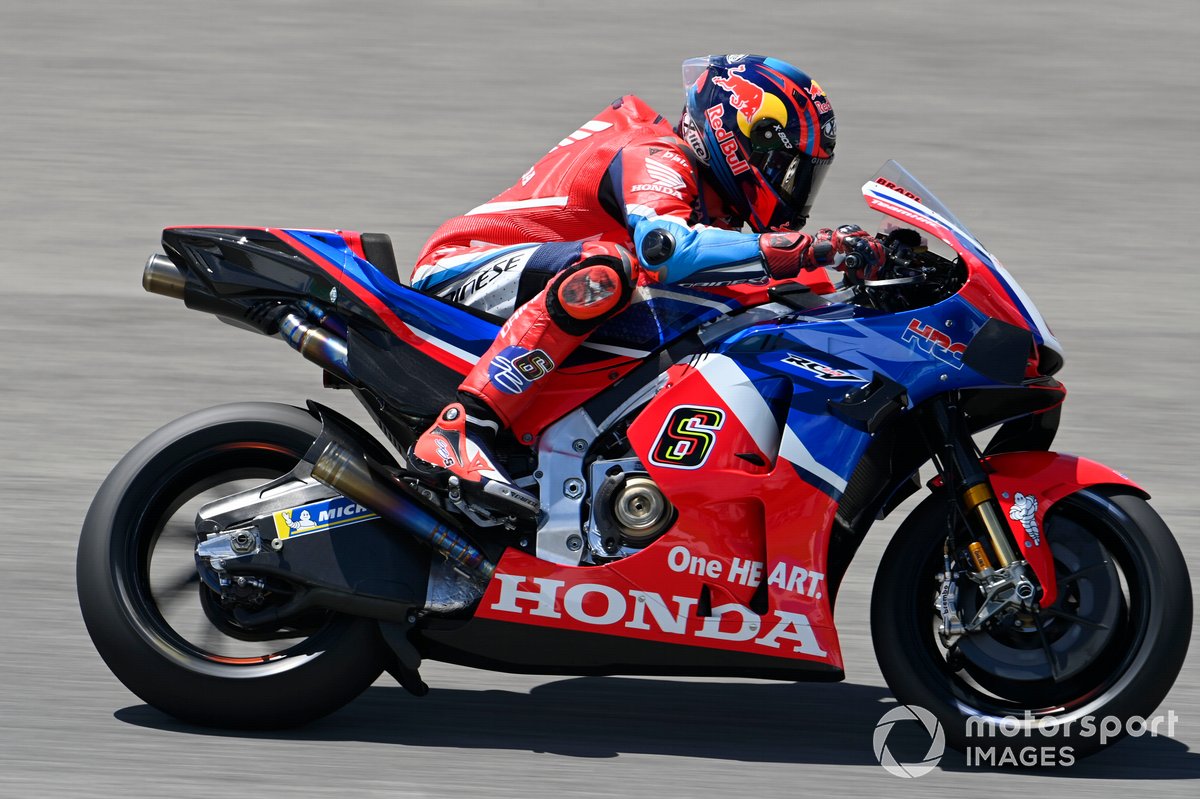 Of the feared Yamaha charge, Petronas SRT’s Franco Morbidelli was one of the other riders on Friday to set race pace worth losing sleep over. The 2021 season has been a struggle so far for Morbidelli on an ‘A-spec’ Yamaha beginning to show its age, but a solid run to fourth at Portimao last time out looks to have put him back on track.

Reigning world champion Joan Mir was left in 13th after FP2’s time attack owing to a duff soft tyre, but began FP2 on a 15-lap old medium rear. On the third flying lap of that run he produced a 1m38.656s, keeping his pace at the mid-high 1m38s range on run two when the tyre started off with 20 tours on it. Exceeding race distance on that compound, Mir will be a weapon if he can have a decent qualifying.

Bagnaia’s one-lap pace may have been hot but his race pace needed work, the Italian himself admitting he needed to find three tenths to get on terms with the likes of Quartararo, Espargaro and Morbidelli.

Of the Yamahas, Maverick Vinales is in need of a big result at Jerez after a disappointing run to 11th in Portugal. He spent Friday on his Portimao bike trying to understand his issues from that race, finding a lack of front grip. Given it was a strong front end which propelled him to victory in the season-opening Qatar GP, Vinales has found his direction to work in for the rest of the weekend.

“In Portimao, somehow we lose a little bit the way, we change a bit too much on the bike and the feeling was really different to Qatar and the feeling was bad,” Vinales said after ending Friday an encouraging fifth-fastest, given his sub-optimal feeling on his factory Yamaha. “So, my idea is to come back like I was in Qatar and make more laps and try to understand what the bike needs, because in Portimao the grip changed and I made a mistake changing the bike.”

Ducati hasn’t won a grand prix at Jerez since Loris Capirossi in 2006. For the first time since 2017, Ducati enters the fourth round of the campaign without a win to its credit. Bagnaia’s one-lap pace may have been hot but his race pace needed work, the Italian himself admitting he needed to find three tenths to get on terms with the likes of Quartararo, Espargaro and Morbidelli. 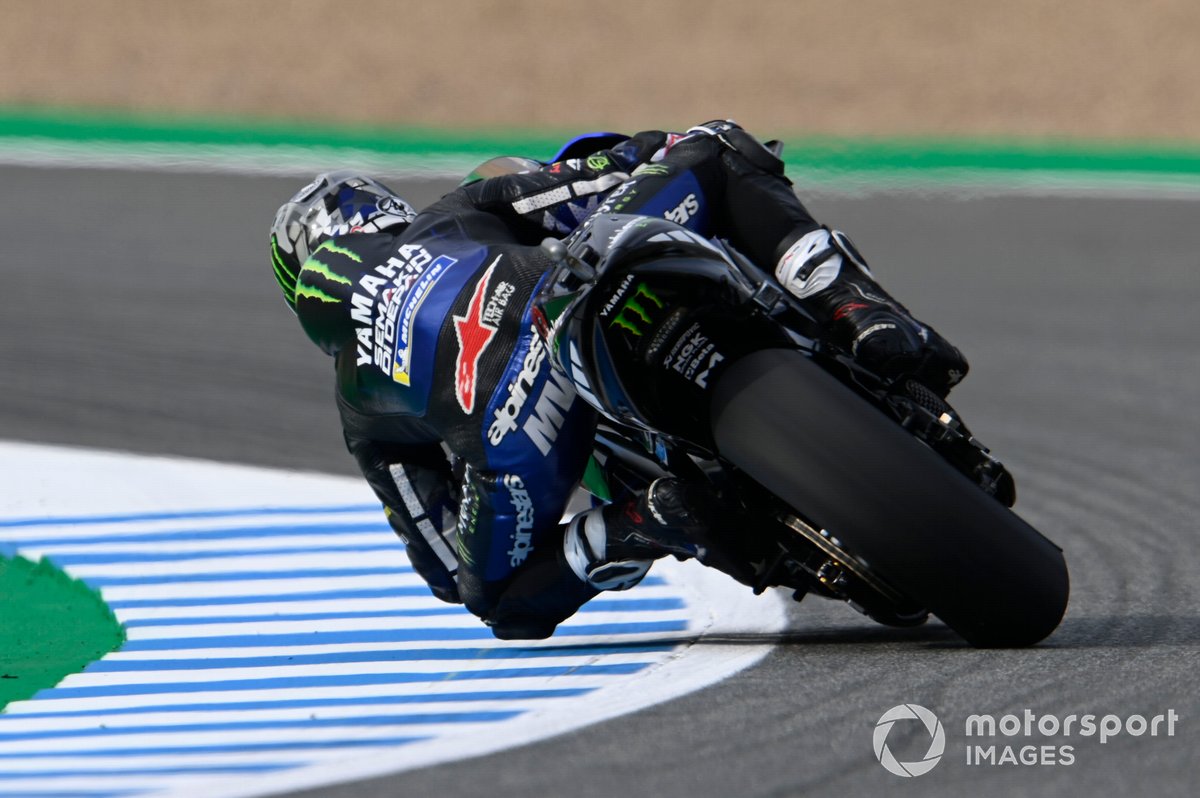 As for KTM and Honda, the front tyre allocation for Jerez finally offers a hard enough compound for both to take profit of having struggled so far in 2021 with the Michelin range on offer. Brad Binder led FP1 and completed the top 10, with KTM teammate Miguel Oliveira seventh – both riders showing solid pace, but still in need of improvement.

Honda’s top runner was Takaaki Nakagami in sixth on the LCR Honda. The Japanese back-to-backed chassis on Friday, his used-tyre pace not far off the best, while factory rider Marc Marquez’s standing in the order remains hard to gauge having worked exclusively in FP2 on getting his body back up to speed.

As has been the case so far this season, Yamaha has come out the gates incredibly well at the start of the Spanish GP weekend. Quartararo is well on his way to making himself a race favourite, while former teammate Morbidelli has found the odds a little more in his favour.

But if Aleix Espargaro can carry on his momentum from Friday and keep the Aprilia in the mix as the field inevitably tightens during the weekend, the rest may have to keep an unlikely eye on the RS-GP in the lead battle on Sunday… 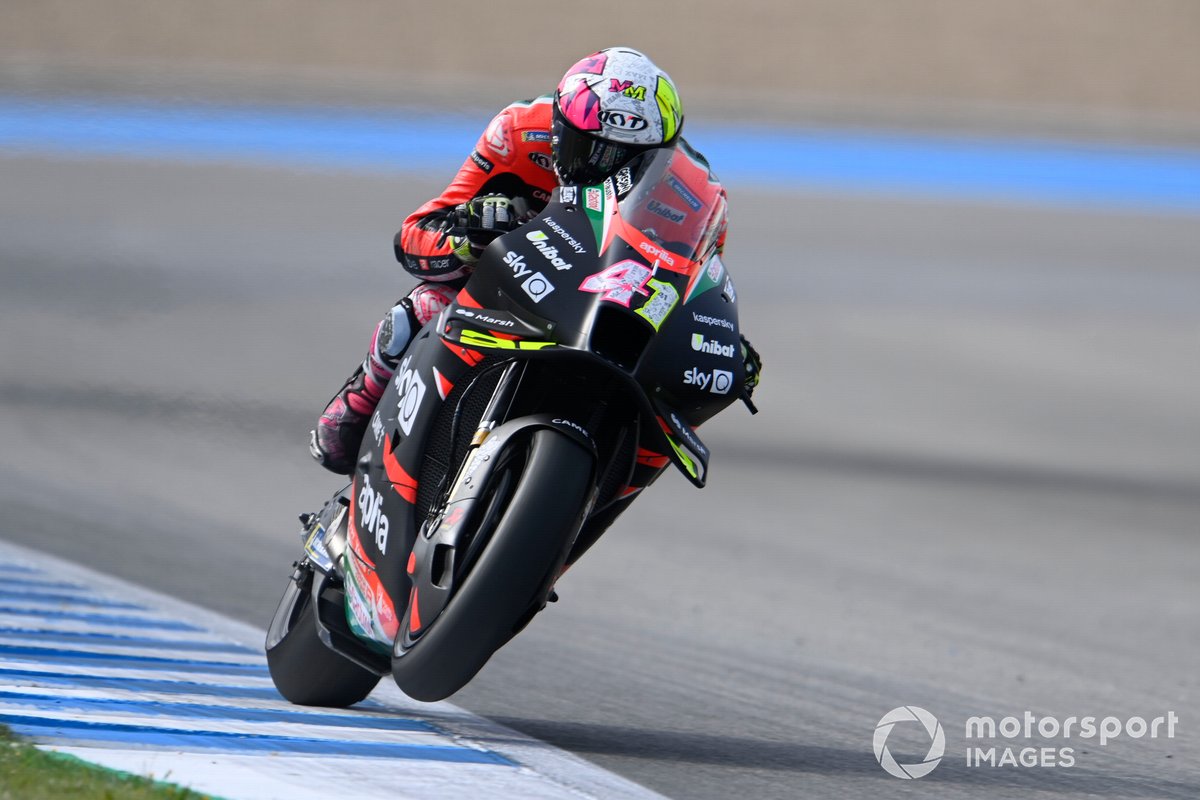