In the co-feature, unbeaten Michael Conlan won by a majority decision over Ionut Baluta over 12 rounds for the vacant WBO International title.

In the ninth round, Mthalane went to the body well, winning his first-round slowing Edwards down a bit. In the tenth round, Edwards went back to moving more and out, landing Mthalane. In the eleventh round, a desperate Mthalane came on strong in the final minute while Edwards still did enough to pull it out. In the twelfth and final round, Edwards lived up to his nickname “Showtime,” moving and countering, coming close to a shutout over the champion Mthalane. 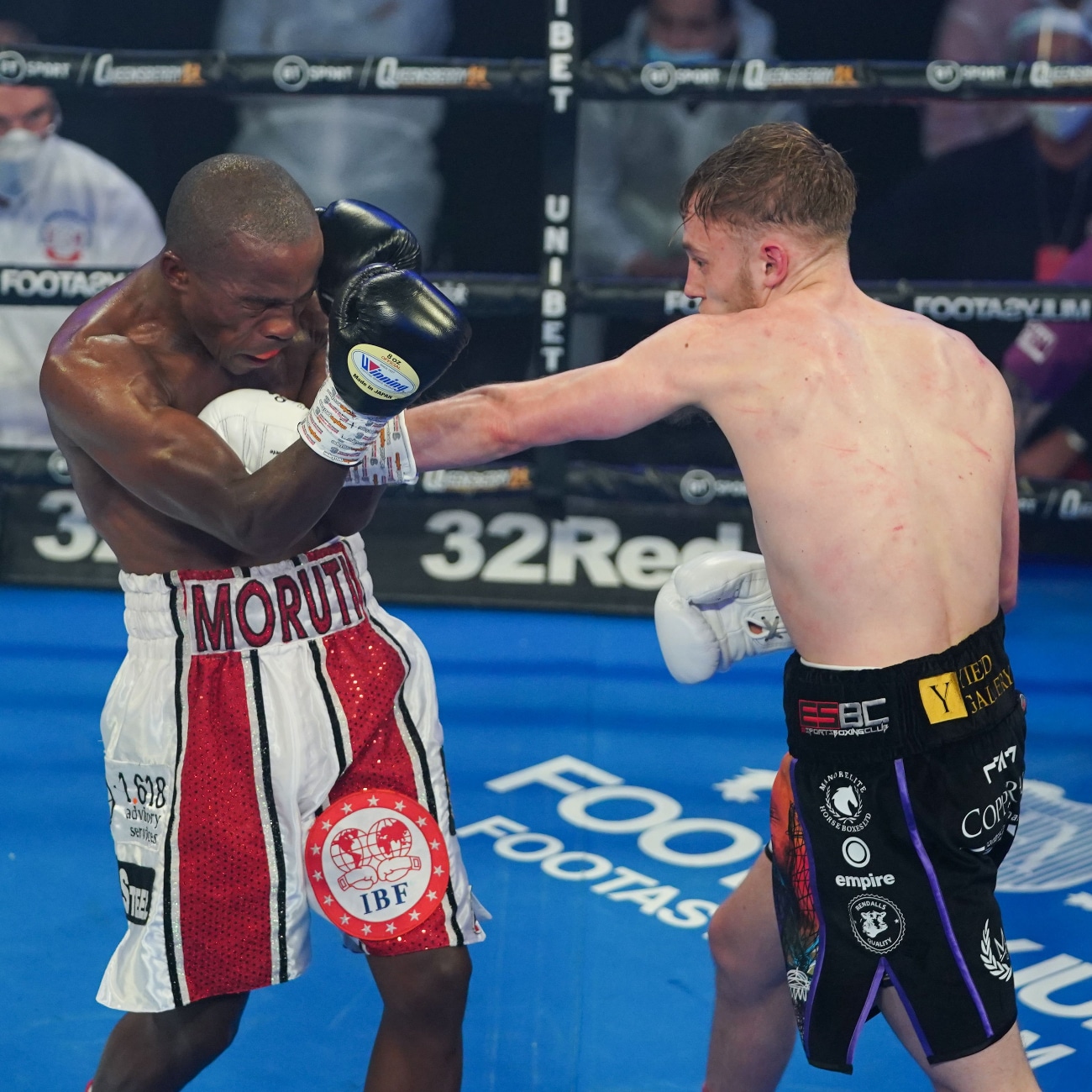 “Nothing less than I expected (answering becoming world champion). He has been my friend, and I hope he still is. I am the Ring champ, and my legs are tired than ever before. My trainer Grant kept reminding me of my son to keep me going. Every time he came close, I let my hands go while he was coming on the last couple of rounds. He has been a great world champion,” said Edwards. “He was brilliant and one of the best performances I’ve seen in years, and he’s the No. 1 flyweight in the world. I would bet Floyd Mayweather, if he was watching, enjoyed his performance. I was only concerned when he stood his ground to fight,” said Frank Warren, the promoter.

In the first round, Conlan slipped punches from Baluta and countered well, switching from orthodox to southpaw in the final minute. In the second round, Conlan landed a chopping right on the head of Baluta with twenty seconds left in the round. He had blocked most of Baluta’s punches with his arms and gloves prior to this. In the third round, Baluta was having his best round until the final seconds when a Conlan right landed on the chin, driving him several steps across the ring.

In the fifth and sixth rounds, Baluta outworked Conlan, who did more slipping punches but little countering. In the seventh round, several times, Conlan landed good rights to the chin of Baluta, who kept a good offense of his own in a close round. In the eighth round, Conlan worked the body of Baluta well.

In the ninth round, Conlan had Baluta on the run. In the tenth round, Baluta did well countering Conlan. In the eleventh round, Conlan knocked Baluta off balance with a right on the chin with a little over a minute left in the round. Conlan was the only one who had a bruise under his left eye for the past several rounds. In the twelfth and final round, Baluta looking behind, came out throwing punches in bunches for the first half of the round, with Conlan coming back well but not well enough to take the round. Referee Steve Gray did a fine job. 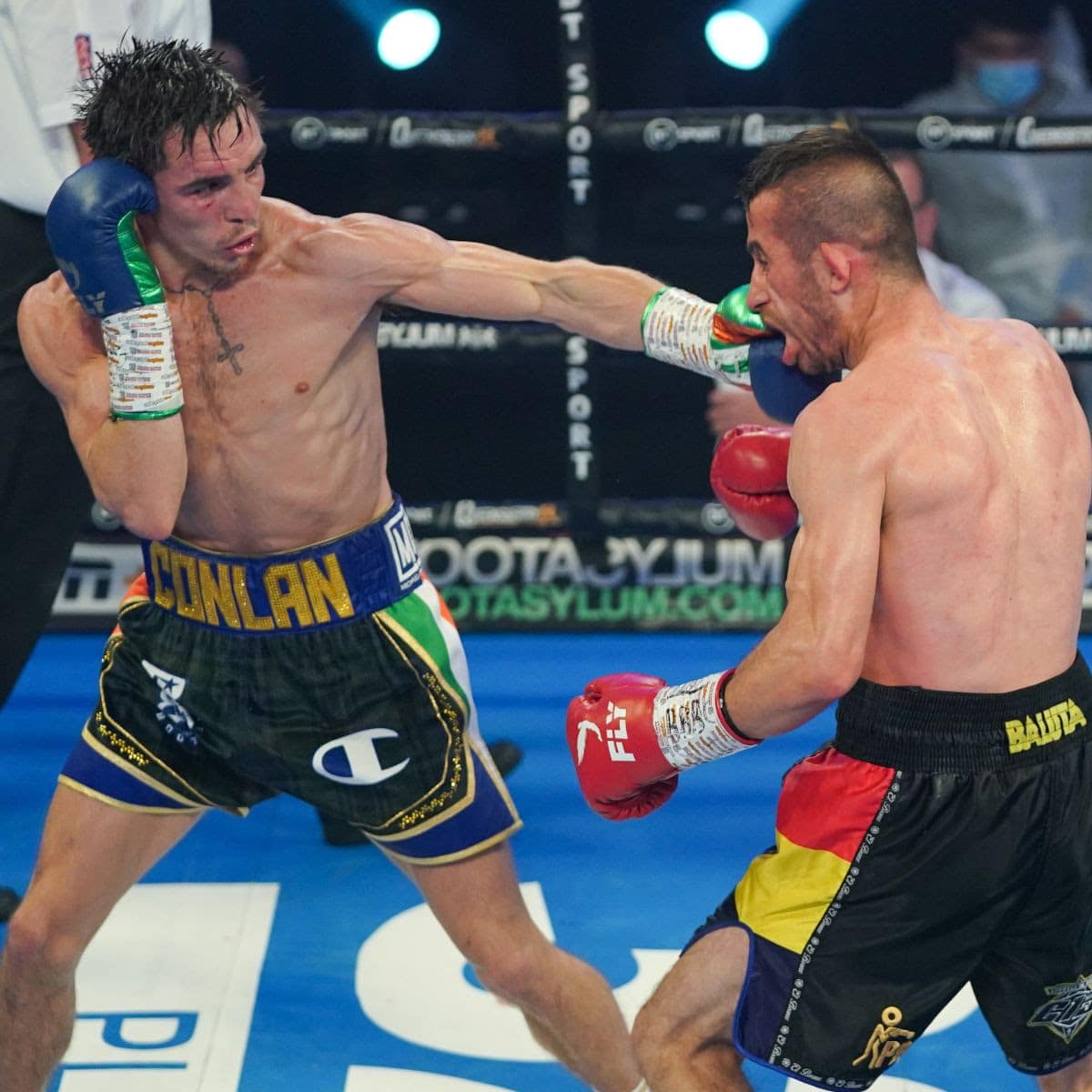 In the first round at the halfway mark, Williamson rocked Smith with a straight lead right on the chin. Smith did more holding than boxing. In the second round, Smith did well with his back on the ropes. Though taller, he didn’t use the jab well in the middle of the ring. In the fourth round, Smith suffered a cut on the outside of his left eyebrow though winning the round.

In the sixth round, Williamson landed a solid right on the chin, hurting Smith. He landed a total of nine punches with the final two chopping rights on the head, having Smith falling face first as referee Bob Williams tried breaking his fall. Smith was on the canvas for about five minutes.