By Matt Lieberman: Bob Arum is not counting out underdog Manny Pacquiao in his fight against Errol Spence Jr on August 21st. The 42-year-old Pacquiao (62-7-2, 39 KOs) is seen as too old and small to deal with unbeaten IBF/WBC welterweight champion Spence (27-0, 21 KOs) in the eyes of many people.

Arum points out that Pacquiao has been in a situation where he was a considerable underdog against the much bigger Oscar De La Hoya in 2008, and he defeated him by an eighth-round knockout.

Of course, there’s a big difference in where the past his prime weight drained 34-year-old De La Hoya was at when he fought Pacquiao compared to Spence.

De La Hoya was a part-time boxer by that point in his career, and he made the mistake of agreeing to come down from 154 to 147 to fight Pacquiao.

Taking the weight off proved to be too much for De La Hoya, and he looked terribly drained.

Arum: You can’t count out Pacquiao

“Spence and Crawford would be a big favorite against Manny Pacquiao,” Arum said to Fighthype. “But you never count Manny Pacquiao out. Pacquiao is the kind of fighter that can rise to an incredible occasion. 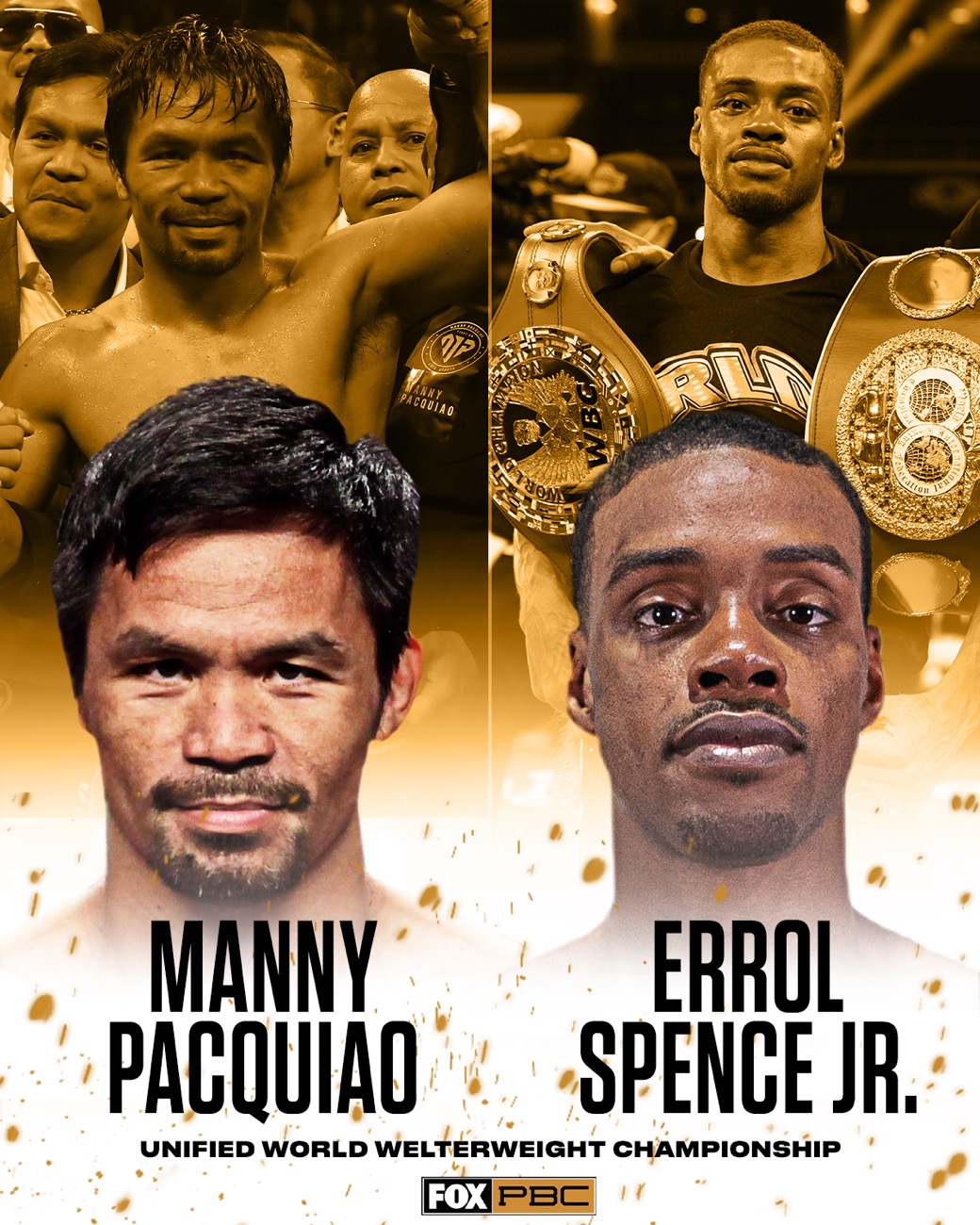 “I remember when I put Manny in with Oscar De La Hoya, and they threatened to put me in jail in the Philippines for jeopardizing Pacquiao’s life.

“All the reporters here said what a mismatch it was, and it ended up, Pacquiao handled Oscar easily, and it was a mismatch the other way. There are certain guys in life that you ever count out, and one of them is Manny Pacquiao,” said Arum.

It’s got to be hard for Arum to pick against his former fighter Pacquiao because they were a team for a long time when the Filipino star was with Top Rank.

Arum is hinting which way he’s siding by saying that Spence is a big favorite, and that tells you that he doesn’t think Pacquiao will win.

Pacquiao did beat Keith Thurman by a 12 round split decision in his last fight, but that was two years ago in 2019. Pacquiao hasn’t been fighting. And we don’t know what he’s got left at this point in his career.

Crawford to fight in October

“We’re going to meet with Crawford’s people on Friday, and then we’re going to have him in the ring in October,” said Arum about Crawford’s next fight. “Then we’ll see where he goes from there.

“I don’t want to discuss it until I talk to them. I’ve never heard that name mentioned with Crawford,” Arum said of Josesito Lopez.

“We hard the first crack, and we had the money coming from Abu Dhabi,” said Arum about his efforts to make a fight between Crawford and Manny Pacquiao.

“For one reason or another, probably because of the pandemic, the Abu Dhabi people didn’t come through.

“Pacquiao wanted the fight, and it’s an enormous risk for any promoter doing a Pacquiao fight because of his purse guarantee,” Arum said.

So it looks like Crawford will be fighting only once this year in October. The options that Arum has for Crawford’s management aren’t likely too good.

Crawford already said he didn’t want to fight Vergil Ortiz Jr, and it’s too late for him to face Shawn Porter because he’s going to be battling Keith Thurman. There’s Mikey Garcia, but that’s probably not a guy he’ll want to deal with.

Risks too high for Pacquiao vs. Crawford

“They don’t understand the situation,” said Arum when told that other promoters criticize him for not getting fights for Crawford. “This is a business.

“Could I have gotten Terence a fight against Manny Pacquiao? Of course, but I’m not in business to lose millions of dollars.

“When we estimated what it [Pacquiao vs. Crawford] would do, our figures showed that it would be a substantial loss.

“I respect other promoters who run figures as well, and they show there’s an opportunity for a profit.

“That’s the way business is. It’s not to say one is wrong and one is right. If PBC, whatever they’re spending on the fight, is able to make a profit, great for them. But I think the risks are much too great,” said Arum.

It’s too bad that Arum didn’t take a chance by putting the Pacquiao vs. Crawford fight together for the U.S. If it had turned a profit, Arum might have done well.

Next post Sterling and Hale to tangle with Nese and Daivari, Waller to debut against Sunil on 205 Live