The all-Mexican pay-per-view boxing extravaganza begins at 9 p.m. ET/6 p.m. PT with three fan-friendly undercard bouts leading up to the heavyweight main event. The showdown between the two most accomplished Mexican heavyweights in boxing history will leave the winner one step closer to a heavyweight title.

TGB Promotions promote the May 1 event. Tickets are on sale now and can be purchased at AXS.com. Dignity Health Sports Park will be open to fans in a limited capacity, with all guests remaining socially distanced and subject to local and state health guidelines throughout the event.

Here is what the fighters had to say Wednesday:

“I was at 310 pounds when I started this camp. We started losing weight slowly but surely. People wonder if I’m still going to have the same power after losing weight, but I’ve been working hard for this moment, and the power is definitely staying with me. 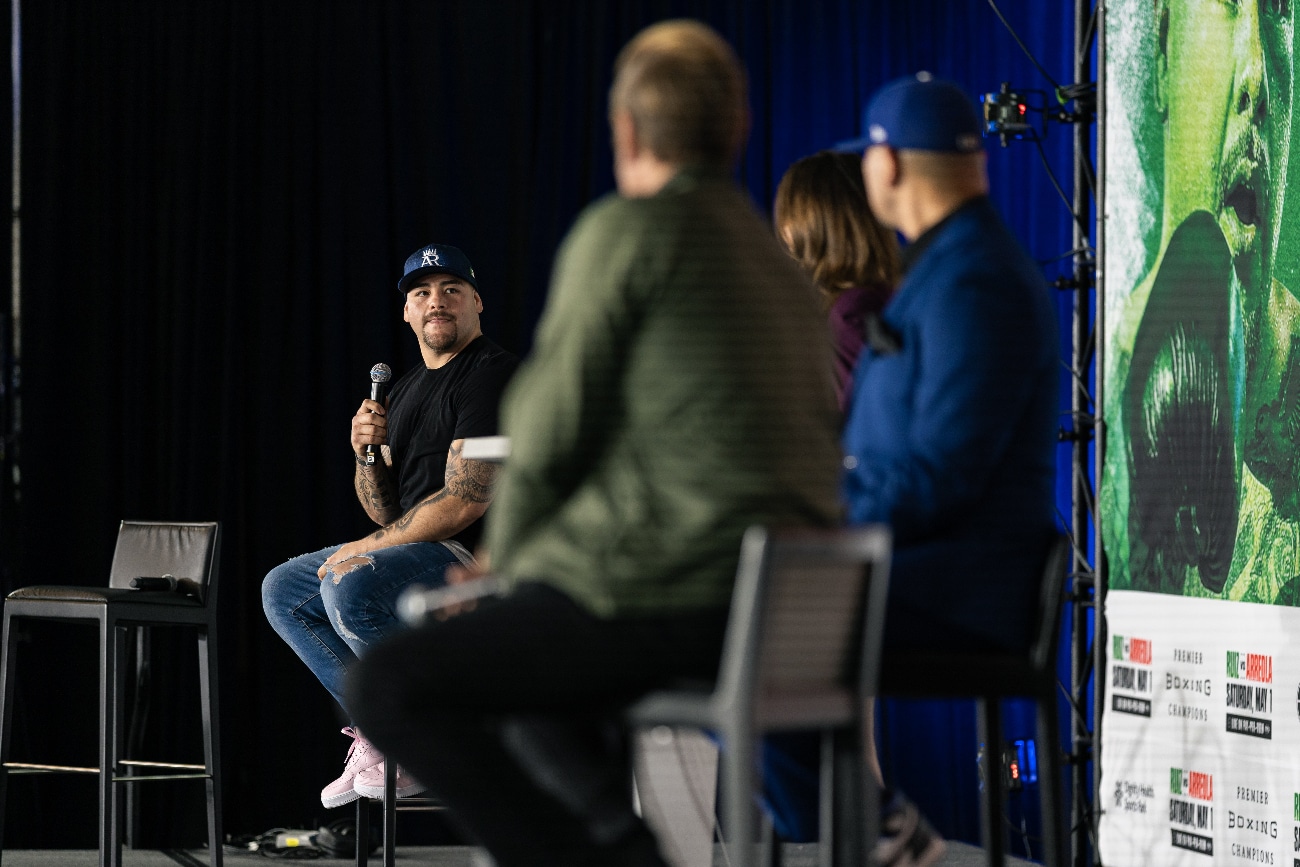 “It’s motivating to be looking at Chris right now. I haven’t seen him in a long time. Now we finally have the chance to give the fans what they want to see Saturday night. It’s going to be a privilege.

“Everyone has a plan until they get hit in the face. We both have to do our business there. I’m praying to be victorious and for both of us to come out healthy. The better man will win on Saturday night.

“I believe I have the fastest hands at heavyweight. I’m not where I want to be right now, but I’m a lot better than where I was. I have so much to prove to start Saturday night.

“The lack of discipline that I had before training with Eddy Reynoso has been the biggest difference heading into this fight. You can’t play boxing. You always have to stay ready. That’s one of the main things that I’ve focused on, in addition to perfecting every movement I make in the ring.

“The game plan is always to be victorious. We have little strategies and combinations that we’re perfecting. I’m making sure I’m throwing punches the right way. I appreciated every trainer that I’ve had, and I learned something from all of them, but I feel like being in camp with Eddy was the best move for me.

“Right now, I’m motivated. I killed the old Andy, and a new Andy was born. And I have a lot to prove. I let many people down, and that’s why I had to make big changes to myself. And I know what I’m capable of doing, and I know what I can accomplish. I have it inside of me to become the Mexican two-time heavyweight champion of the world.

“Chris is a strong man. He comes forward, he takes punches, and he gives punches. My speed and the combinations that I’ve been working on in the gym will throw him off a little bit.

“It’s going to be an all-action fight. We both came here to win. God willing, we get this victory, and all the sacrifices we gave will pay off. I have to do my job.

“Eddy made a huge difference for me. He’s helped my motivation and confidence. Without that discipline, I don’t think I would have been in this shape.

“I want the heavyweight title even more now. It’s because of the way I lost. I imagine that if I had been in this shape, I would have won the rematch with Joshua. Things happen for a reason, and I’m just happy that I have the mindset that I have now.

“My natural speed and counter-punching are going to overwhelm Arreola in the ring. I’m not the same fighter who sparred him when I was 16-years-old.

“After my defeat against Joshua, I know that I have to prove to a lot of people, and also to myself, that all my dedication will pay off in the ring.

I know Chris Arreola is here to knock my head off, just like I’m trying to do to him. Once we’re inside that ring, the switch will be on because we’re both trying to provide for our family.”

“I feel very rejuvenated heading into this fight. I’m excited and ready to go. Today is just a press conference, but seeing Andy today gets my blood going because I’m ready to fight right now. 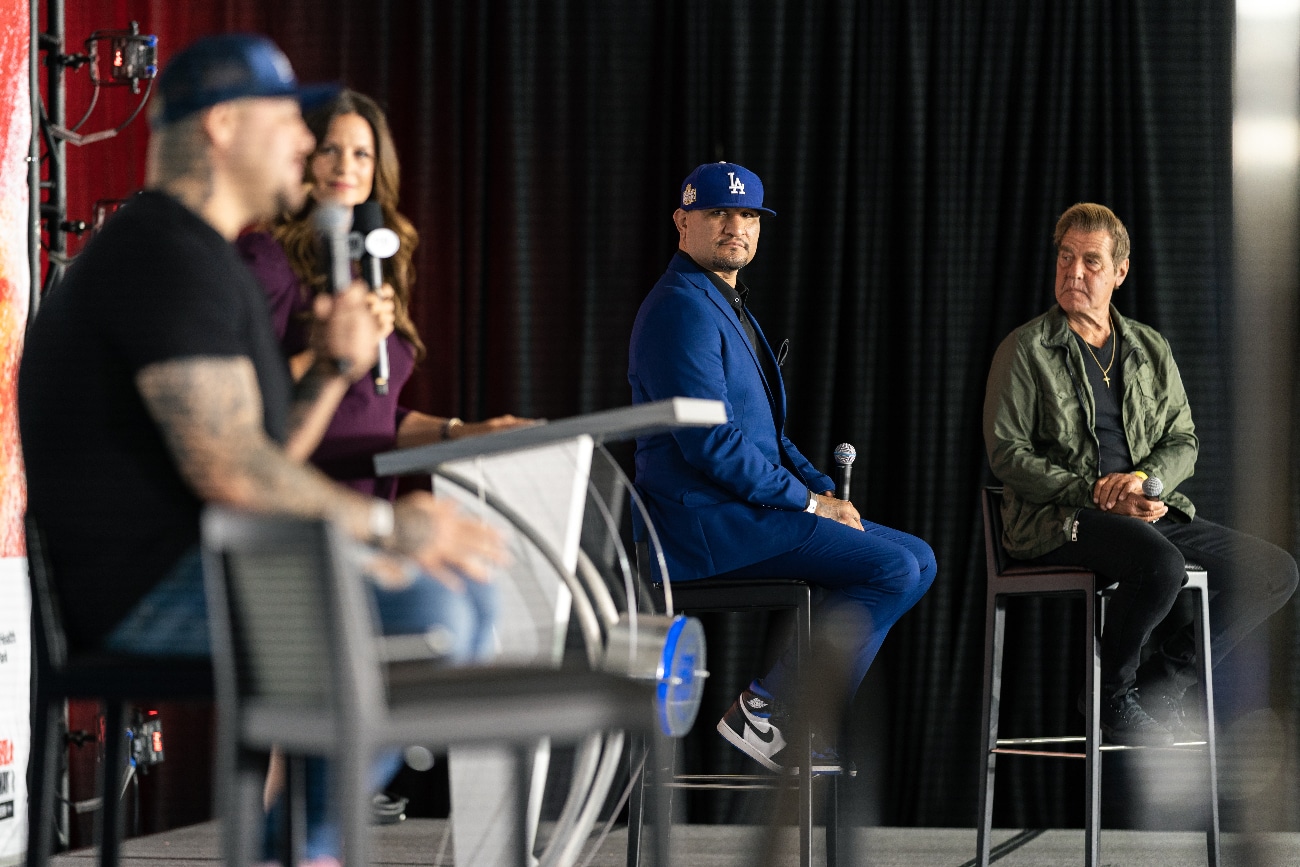 “I always want to win, but facing someone like Andy, who’s accomplished what he has, can add another notch to my belt. He’s the man that beat the man, so I want to beat that man.

“We’re heavyweights, so as long as we’re over 200 pounds, every punch is going to hurt. This is the hurt business. He’s a skillful fighter, and I’m ready for what he has to offer.

“I’ve worked so hard, but I haven’t been trying to lose weight specifically. The hard work has shown in my body, and it’s going to show on Saturday.

“Ruiz and Adam Kownacki are very different fighters. With Adam, we just slugged it out. With Andy, I have to be aware at all times. He has some of the fastest hands in the division. I have to make sure I move my head because this is going to be a great fight.

“And I know what my trainer Joe Goossen wants me to do. I know he wants me to work hard every time at every moment. He’s always watching me, so I can’t take a round-off in the gym. There’s no substitute for hard work, and I appreciate that from Joe.

“This fight isn’t personal in the fact that I dislike Andy. I have a lot of respect for Andy, and that’s why I trained extra hard. This will be one of those battles of attrition. This is a fight that I need to win for my legacy.

“I haven’t separated myself from my family during camp to the extent that I did for this fight before. And I had to make sure I had nothing but Andy on my mind. I had to put my best foot forward every day. This is a mountain of a man, and I don’t mean his size; I mean his strength and all-around skill.

“I’ve worked nonstop on defense with Joe. That’s definitely something we emphasized. I’m going to counter-punch and make sure I bring those hands back. All I know is, I’m going to give Ruiz war and a great fight.

“Saturday’s coming, and I can’t wait. I put the hard work in at the gym, and Saturday is time to showcase it. We’re going to leave our friendship aside once we step into the ring. That friendship is out the door until that last bell rings.”