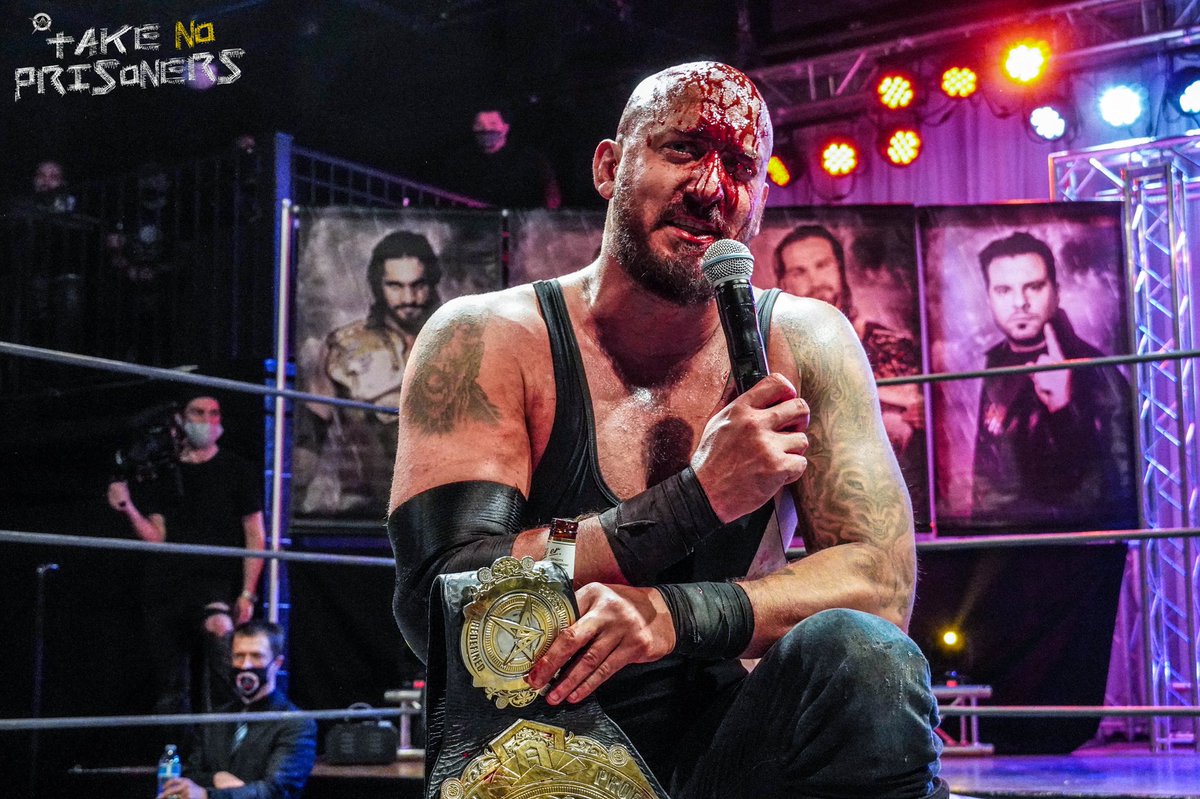 Jake Something lost the AAW Heritage Championship at the end of 2019, lost his tag team partner in Curt Stallion at the beginning of 2020, and then lost the rest of the year due to the pandemic. With so much destruction around Something, it would be easy for him to slip back down the card. This display of dominance, mainly a Mike Awesome-esque dive over the top rope and a spear through a door that took out both of his opponents, reminded everyone that Something is still a force in AAW. Very fun opener.

After the match, Jake Something challenged the winner of Fred Yehi vs. Mance Warner for June 11.

After eating a loss against Jake Something on the prior AAW show, Zane is back to his winning ways with a dominant victory over Dante Leon. Everything Zane does has really nice snap to it. I think he works best in environments like this where he’s clearly in control. His offense looked destructive and Leon looked great being ragdolled around. Zane won with the Rings of Saturn in 11 minutes. **3/4

The Besties were backstage talking about their upcoming matches when John E. Bravo approached Vega and offered him his managerial services. Vega turned him down, but Bravo insisted that he at least think about it.

I like Skye Blue. I think she could end up being very good. She popped up when AAW started running limited capacity shows last fall and nearly every time I’ve seen her since, she’s improved. This wasn’t as strong as her show-long angle with Hyan from a few weeks ago, but this is the type of match that Blue will benefit from in the long run. Kay is one of the few veteran women left on the indies and I thought Blue hung with her the entire time.

The biggest flaw in her game right now is her strikes. I don’t buy a single strike that she throws. Her evasiveness, though, is a major asset. She looked great bouncing around AK-47.

Speaking of Kay, she brings such a tremendous presence to these shows. She’s one of the few products on these shows that knows who she is and exactly what she can bring to the table. That’s something that comes with experience. Kay scored the win in a match that I found to be fun from start to finish. ***

This was a good reminder of just how good ACH is. Let me be clear, Vega held up his end of the bargain, but this was The ACH Show.

These two have been wrestling against one another since 2011 (including one notable tag match with Akira Tozawa) and they used that to their advantage in this match. Vega was initially hesitant to strike ACH, but as the match wore on, both men began unloading on one another. I’m not sure when it happened, perhaps when he started getting acclimated into the NJPW system, but ACH has become such a dominant striker. Everything he did looked like it was impaling Vega.

Vega looked outmatched and overpowered the longer the match went. It became clear that despite his immense success as a tag wrestler in this promotion, he was struggling to find success without Mat Fitchett by his side. That all bled into this match. ACH eventually won with a brainbuster in the match of the night up to this point. ***½

Have Heart once sang, “sometimes a man breaks, sometimes he can’t bend / when his youth is a wound time won’t mend”. Davey Vega, after a youthful run with Mat Fitchett as the Besties in the World, has been broken. He called out John E. Bravo and agreed to the terms of his managerial services.

The Besties delivered in back-to-back matches. This was largely built around Mat Fitchett basing for Myron Reed, who was in the mood to take insane risks even for his own previously-established standards. Fitchett maintains his role as wrestling’s best kept secret. This is a match that could’ve easily fallen apart. Had Reed been lined up against Brayden Lee, whom he wrestled in his prior defense, the match would’ve fallen apart. Fitchett kept things in line and provided Reed with an opportunity to be reckless in the best way possible.

I would’ve liked to have seen Fitchett get the win. I think he and Vega feuding over the Heritage Title would’ve been an interesting route. Instead, they both pick up L’s on this event. I can’t complain too much, though, as I’ve been begging for a Fitchett singles push for years and we’re finally getting it. ***1/4

Hakim Zane cut a tremendous promo backstage calling out Myron Reed for another shot at the Heritage Championship.

Schaff interjected himself into this match after it had started. He promptly destroyed Page and Chambers, then got on the mic and put everyone on notice going forward. I don’t like wonkiness like someone randomly joining a match, but this was effective for what it was.

There are people that are going to be really into this match. I am not one of those people. While I’ve typically been a big fan of the walk-n-brawl style that Matthew Justice has brought to the table in AAW, this was a miss from all four men. Part of this match was worked either off-camera or in the dark to a point that it was hard to view, and the other part of this match was a pretty standard brawl that didn’t entice me in any way. They worked hard. I can’t fault them for that. But Justice in particular is someone that has pushed the bar for what is possible in this environment and in this contest, I found all four to be retreading old ideas. Not a bad match, but not one that I enjoyed. The nearly 20 minute runtime did not help matters.

Manders hit an Iowa Stampede off the top rope on Joeasa as Justice hit a splash onto Rusman for the win. **3/4

The work in this match was a level above everything on the show up to this point. Fitchett, Vega, and ACH looked like pros, but both Lio Rush and Laredo Kid looked like world-class athletes in this contest. They moved faster, hit harder, and were simply better than anyone that had stepped foot in the ring prior to them on this show.

Rush is someone who can hopefully find a sustained push in AAW. In a main event scene dominated by Fred Yehi, Mance Warner, Manders, and Matthew Justice, among others, Rush’s high-speed, high-flying ways stand out from the pack. He’s someone that could work with a young talent like Brayden Lee or challenge for the heavyweight title against the previously mentioned established names.

Laredo Kid showed up and worked his ass off. With the Lucha Brothers in AEW and Flamita and Bandido locked away in ROH, he has a chance to become the premier luchador on the US indie scene. Matches like this are going to earn him that reputation. Well worth your time. ****

If you missed it, get the replay on @FiteTV @TheLionelGreen vs @Laredokidpro1 can’t be missed!

I still like the idea of Ace Austin & Mad Man Fulton on paper more than in execution, but I can certainly live with outings like this. Fulton and Trey Miguel had excellent chemistry. If there was a star in this match, it was Miguel, who seemed reenergized from the last time I saw him. He never backed down from the big man despite being thrown around multiple times. The Diesel-representative of the champions tried to swat Miguel away like a fly, but time after time, the challenger came roaring back.

Miguel and Loco don’t have much chemistry as a team. It seemed like they were on separate pages the entire bout, whereas Austin & Fulton have yet to have a truly great match as a tandem, but I buy into the idea that they are a proper tag team. Austin pinned Loco for the win. ***

After the match, Austin called out any tag team that wanted a shot at them, prompting a response from Manders and Matthew Justice.

Fred Yehi is a beast.

When Yehi stepped into an EVOLVE ring at the end of 2015, I never expected that we would see him in a match so violent and so vicious. For a man who has built his career off of slow, methodic grappling matches, he had no problem stepping into the role of an unforgiving, at times sadistic challenger for the AAW Heavyweight Championship. This might not be the best match that Yehi has been involved with in his entire career, but it is his most unique.

Yehi brought something out of Warner that hadn’t been seen in any of his title defenses yet. He had brawled with Sami Callihan and Manders and swung with Hakim Zane and Josh Alexander, but he hadn’t been deeply dissected in the way that Yehi did to him.

Warner was choked with an electrical cord early on in a spot far more violent than what we usually see from AAW. Then, in a move that would set the tone for the rest of the match, Yehi grabbed a glass bottle and carved the forehead of Warner. The champion bled buckets like a luchador in an apuestas match.

The challenger controlled nearly the entire match. Warner’s biggest hope spot was spearing Yehi into a guardrail that had been brought into the ring. It was a brief moment of hope for the champion, but one that wouldn’t last too long.

In a cruel twist, Warner ended up out-wrestling Yehi, countering a strike attack from Yehi and then rolling him up for the win.

After a month of quick, compact shows, AAW brought forth their first major show since February 2020. The clear distinction between AAW and the rest of the indies on their level is not the match quality, but the fact that on a 10 match show, 9 matches had some sort of storyline implication. The only match that existed as a match was Rush vs. Laredo Kid, and many will argue that that was the best match on the show. There is a level of care that is put into the AAW product that has been absent from most of the scene since the start of the pandemic.

AAW continues to move in the right direction with both their storytelling and with their in-ring action. While Take No Prisoners was not their strongest show ever, the main event was a reminder of the highs that this promotion is capable of reaching. Both the Heavyweight Championship match and Laredo Kid vs. Lio Rush are essential viewing.

Shake Them Ropes: (Slap)Jackin’ in the Wind